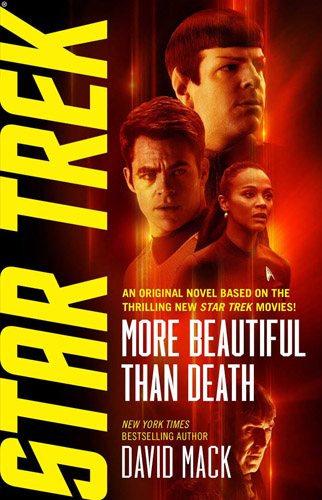 Captain James T. Kirk and the Enterprise crew escort Spock's father, Ambassador Sarek of Vulcan, to a dilithium-rich planet called Akiron. They arrive to find this world under siege by creatures that some of the planet's denizens believe are demons. Sarek orders Kirk to abandon the mission, but the young captain won’t turn his back on people in danger. After a harrowing encounter with the dark-energy 'demons', Kirk’s belief in a rational universe is challenged by a mystic who insists that it wasn't coincidence that brought Kirk to Akiron, but the alien equivalent of a Karmic debt.

The second ‘adult’ tie-in novel in the Kelvinverse - the timeline established in the JJ Abrams series of Star Trek movies - was written ten years ago but only now published (with tweaks by the author).

We meet Kirk and the crew some time after the first movie, carrying a diplomatic mission to a planet that’s requested aid from the Federation, and of course on arrival things become complicated.

I found however that I struggled to get into it. Each chapter felt like it ended at a convenient point to stop reading - not the level of compulsion to continue that I love. I’m not in general a huge reader of TOS stories, having not got the same relationship with those characters as with those who came later, and here my mental model of the characters has become really mixed - I was picturing Chris Pine’s Kirk, but James Doohan’s Scotty, and Ethan Peck’s Spock - with Bones fluctuating between actors’ faces.

So I’m afraid not one I feel I can recommend. Maybe if it had come out ten years ago I would have felt more connected to it, but at this stage I didn’t, and struggled.