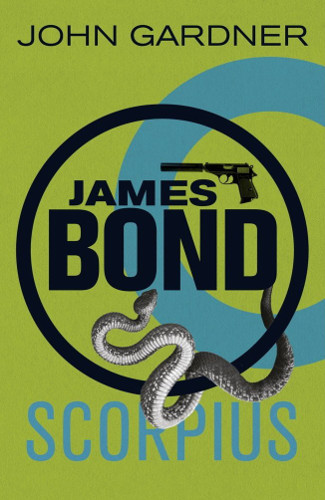 The corpse of a young girl is found in the Thames. Special Branch call on James Bond who finds himself caught in the middle of a deadly game of terrorism and arms supplies involving the Society of the Meek Ones led by Father Valentine who has links with Vladimir Scorpius "The King of Terror".

Scorpius is an interesting take on the James Bond novel. There are aspects that feel Fleming-esque, but on the whole it feels neither like something crafted by the character's creator, nor like the previous novels written by John Gardner. It's lost a lot of the more eighties aspects, and feels quite trimmed back and without extravagance.

The book is more of a secret-agent procedural novel, with a little bit of character towards the end that doesn't get followed up properly in this novel - but perhaps Gardner is taking a leaf from Fleming's book and leaving the repercussions to the next book in the series.

The plot itself feels filled with coincidence - Bond just tumbles into events by accident rather than actually going on a mission, and seems a fairly useless agent for a lot of the time. Overall, the whole novel feels like it could have been about any secret agent - it's missing the ingredient that means it could only be about James Bond.

I remember having this book as a teenager - I don't know whether I didn't read it or just completely forgot the plot, but I suspect that if you ask me again in another ten years I will have forgotten again.