The Sting of the Scorpion 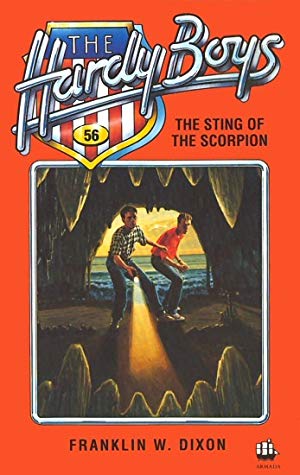 During Mr. Hardy's investigation of a ruthless gang of terrorists, Frank and Joe witness an explosion in the sky near an airborne dirigible owned by Quinn Air Fleet. The young detectives look into a clue that takes them into a new animal park outside Bayport, where they are lured into a trap by an unknown enemy. Problems arise for the park owner as he receives pressure from a competitor and a real-estate firm to sell out. Strange occurrences at the park also frighten the visitors and animals. Frank and Joe take up the case despite fore warnings.

The final novel in the original publisher’s run of Hardy Boys novels is unusual in a couple of respects - the plot is more outlandish than I’ve become used to, and it makes several references back to earlier stories, something the series to date seems to generally avoid.

Unlike the preceding books, this one takes place mostly near home, though the Hardy’s continue to be supported by their crew of dedicated friends. The mysteries on this occasion are a cross between airships and a Safari park, two concepts which feel slightly alien from a modern point of view.

The adventure feels very relaxed, causal in its storytelling, and this gives makes it a more engaging experience that some of the earlier novels.

I’m not entirely convinced that I followed the plot though - there seemed to be a lot going on and the same time, but ultimately I don’t think that matters this time.