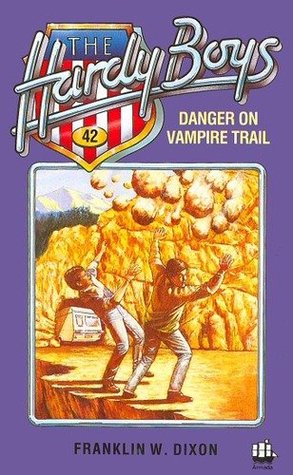 An assignment form their famous detective father to track down a ring of credit-card counterfeiters takes Frank and Joe Hardy on an exciting camping trip to the Rocky Mountains. But the cross-country trek with their pals Chet Morton and Biff Hooper is jinxed from the very first day. Strange happenings on a nearly impassable mountain lure Frank, Joe, Chet, and Biff to almost certain death before they discover the sinister reason for the danger on Vampire Trail.

The title to this fiftieth Hardy Boys novel doesn’t feel very in keeping with the usual storylines, but it seems to just be a gimmick, as the plot is fairly traditional.

The Hardy’s and friends are given a new mission to investigate credit card fraud - which feels like it would have been a fairly new type of crime in the US in the early 1970s.

The problem with this book is that there’s too much going on for it all to tie together into a nicely followable storyline. There are three or four different threads which feel like they are being dragged together rather than neatly joining into a pattern, and it didn’t feel like the overall resolution was anything but coincidence driven.

So while it was interesting to experience a new adventure for the characters, I don’t think this was one of the best.