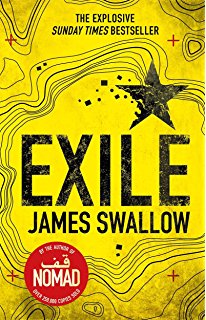 A vicious Serbian gang whose profits come from fake nuclear weapons. A disgraced Russian general, with access to the real thing. A vengeful Somali warlord, with a cause for which he'd let the world burn. A jaded government agency, without the information to stop him. Only one man sees what's coming. And even he might not be able to prevent it.

Marc Dane’s second adventure begins with the blacklisted ex-spy-support-staffer working in a European backwater, as an analyst on loan to a grumpy boss who has no interest in following up on any of the interesting leads he finds, despite the world-changing implications.

I really enjoyed Nomad, the first novel in this series, and the same is true of Exile (though perhaps not quite as much). The plot is a well-threaded web of characters whose paths cross in interesting places, the pace is high throughout and keeps the reader on the edge of their seat, and the action feels realistic and well-researched without turning into a boringly explosive techno-thriller like some I’ve read.

One of the things I appreciate about this series is that it feels like Swallow has put some effort into his baddies - they aren’t cardboard cut-out terrorist stereotypes - but instead have complex and relatable backstories and motivations, and are from a range of geographical, cultural and social backgrounds, which adds a level of humanity. This contrasts really well with a lot of thriller writers who only really care about the explosions and don’t put effort into painting a wider picture.

Probably the thrillers that I’m most motivated to read at the moment - I look forward to picking up the future books in the series.