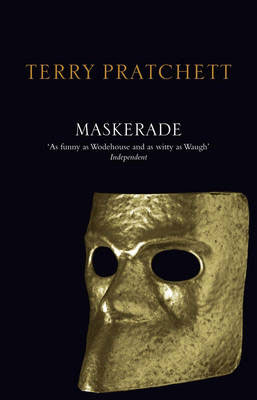 Death. And plenty of it. In unpleasant variations. This isn't real life. This isn't even cheesemongering. It's opera. Where the music matters and where an opera house is being terrorised by a man in evening dress with a white mask, lurking in the shadows, occasionally killing people, and most worryingly, sending little notes, writing maniacal laughter with five exclamation marks. Opera can do that to a man. In such circumstances, life has obviously reached that desperate point where the wrong thing to do has to be the right thing to do.

Granny Weatherwax and Nanny Ogg, in search of a third witch for their coven, head to the city of Ankh Morpork, where Perdita has enrolled in the chorus at the local Opera house. The plot is essentially similar to the musical - a masked man haunts the opera house, teaching his favourites to sing, demanding a box at the opening night, and killing off people he doesn't get on with. Except there's an extra layer too...

Knowing the source material a little better certainly helped with following the plot and some of the jokes - although I'm not entirely sure I really get all the jokes - either that or there just aren't quite as many little clever moments and lines as there were in Men At Arms, the other Discworld novel that I've recently re-read.