The Mark on the Door 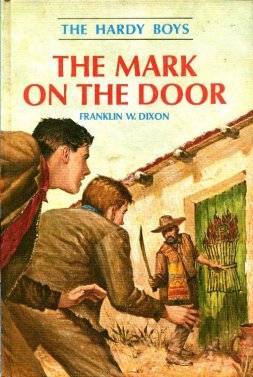 Frank and Joe Hardy, amateur detectives, investigate the mystery of a stolen boat and soon discover that the boat's disappearance is tied to a smuggling operation.

In book thirteen, The Mark on the Door, (or at least my copy of the 1967 rewrite) the Hardy Boys investigate a rather implausible submarine sighting as part of an even more ludicrous plot that sees them use the most forms of transport the author could think of. This is the first time I've read this book, as it wasn't one of those I had as a youngster.

It also features a trip to Mexico, which seems an unlikely thing for a group of teenagers to be taking part in, and gives the opportunity for some of the casual racism that the rewrites were meant to remove (though to be fair, far less than there could have been).

The plot is passable, but nothing special. The guest characters barely warrant mentioning. Overall, not really that impressive a book in the series, and one that I suspect I will quickly forget.