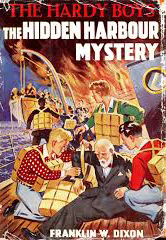 The fourteenth book in the original Hardy Boys series is the first one that I've actually read the original text of, rather than the re-written edition from the 1960s.

It's surprising how different the book feels to the first thirteen which I've recently re-read in their re-written form. The text is less polished, the action more violent, and the language not acceptable any more - it's unsurprising they had to be re-written. There's an undercurrent of racism that perhaps accurately reflects the US in the 1930s but today feels completely out of place, particularly to a reader in the UK.

Despite more time having passed since the 1960s re-writes (to now) than did between the 30s and 60s, the re-writes don't feel anything like as dated - clearly the mid-20th Century was a big change in attitudes in the US.

The plot of this one is quite straightforward without any real complexity, and that makes it bland and forgettable compared to the changes to the series which really stand out. I wouldn't be surprised to find that the re-write were completely different.