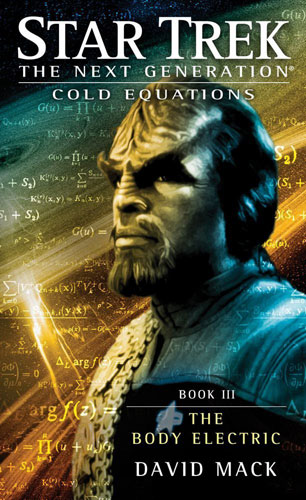 At the centre of the Galaxy, a planet-sized Machine of terrifying power and unfathomable purpose hurls entire star systems into a super-massive black hole. Wesley Crusher, now a full-fledged Traveller, knows the Machine must be stopped, but he has no idea how. He enlists the help of Captain Picard and the Enterprise crew, who also fail to halt the unstoppable alien juggernaut's destructive labours. But they soon divine the Machine's true purpose, which threatens to exterminate all life in the Milky Way Galaxy. With time running out, Picard realizes he knows of only one person who might be able to stop the Machine in time to avert a galactic catastrophe - but he has no idea how to find him.

Book three of the Cold Equations trilogy by David Mack, author of the amazing Destiny trilogy and two brilliant novels already this time, is something of a disappointment. A grave threat to the galaxy and beyond is discovered by Wesley Crusher, and the Enterprise is the only ship that could possibly save the day. Meanwhile one former crew member is hunting for the one man who can bring his daughter back to life.

The parallel plots (neither seem to be more prominent than the other) work well in parallel, but the situation the Enterprise is thrust into is reminiscent of some of the old Trek novels of the nineties and doesn't seem in keeping with the more recent, and more realistic, approached to cross-series continuity in the novels. The level of danger is so extreme that it becomes impossible to expect anything but success for the characters, removing any tension from this side of the story. It's like a game of peril one-upmanship gone too far.

The other half is stronger in premise but feels weakened by a lack of attention and limited action. As a work of science fiction it has a good basis, and there are lots of new characters who explore the available possibility space in a number of interesting ways, but as characters they aren't explored in any real depth and the situation in which we find them doesn't seem consistent with how they are presented.

Until the final quarter, the narrative progresses slowly and I did not feel compelled to read on in any great rush, even taking several days in the middle to read something else. Overall I thought this was a weak conclusion for a Mack book which are usually some of the best in the series.