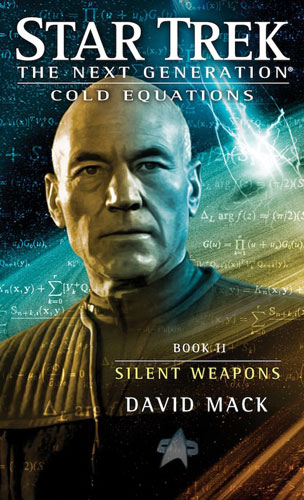 Three years after the disastrous final Borg Invasion, a bitter cold war against the Typhon Pact has pushed Starfleet's resources to the breaking point. Now the rise of a dangerous new technology threatens to destroy the Federation from within.

Captain Jean-Luc Picard and the Enterprise crew answer a distress call, only to become targets in a deadly game of deception. To protect a vital diplomatic mission, they must find a way to identify the spies hiding in their midst, before it's too late.

But Worf soon realizes the crew's every move has been predicted: Someone is using them as pawns. And the closer they get to exposing their enemy, the deeper they spiral into its trap.

Book two in the Cold Equations trilogy picks up a couple of months after the first book, and although they are branded as a trilogy each stands alone pretty well (though you'll want to read them in the right order). Picard and the Enterprise are performing some slightly dubious science experiments when a distress call pulls them into a complex and very interesting situation.

The story contains all of the best elements of Trek, great characterisation, particularly of some of the guest characters, action, diplomacy and Mack's trademark of events that will rock Trek novel storylines for years to come. It flows off the page even better than the previous novel and I devoured it over the course of a single weekend.

Compared to part one, it felt less epic in scope, despite the subject matter seeming to make more of a difference to the ongoing storyline. It pulls together so many elements that it almost seems like there's too much going on, but everything is tied together surprisingly neatly into a plot that almost feels lessened by the slightly anti-climatic climax.

David Mack is the must-read author for Star Trek fans now and his novels tend to be the highlight of the rather sparse publishing schedule. I can only hope that book three will be just as explosive and that it will perhaps resolve some of the plot points that Mack and the other Trek authors have been setting up for years.