The Mystery of the Green Ghost 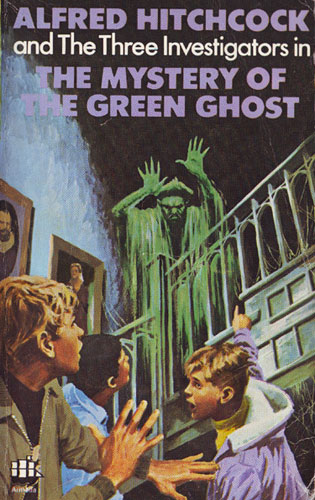 Eerie screams from an old house -- and a dangerous mystery awaits The Three Investigators. When they discover the coveted Ghost Pearls, with their weird, unearthly powers, Pete and Bob are kidnapped and fear for their lives. Their fate depends entirely on their partner Jupiter...

The fourth adventure for the Three Investigators, young teenage detectives in 1960s California, is the creepiest of the series so far, introducing one of the themes more solidly that will run throughout the series.

When Pete and Bob witness the appearance of a green ghost in an old house, it sets the trio off on their most wide-ranging adventure yet. In fact this was a little surprising, as until now the team has been portrayed as rather a low-cost outfit, but they now are hired to fly off on their own as part of the plot, which seemed a little implausible.

The creepiness, particularly of the opening chapters, and the threat levels later on may scare some younger readers, and some of the dated stereotypes might not be what some parents want their children to read today. On the whole though its a good mystery and adventure that feels much more like the formula I remember settling into place.