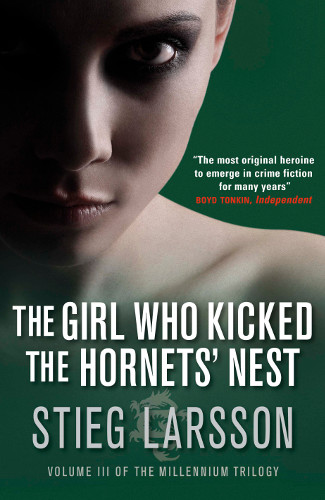 The Girl Who Kicked the Hornets' Nest

The final book in the 'Millennium' trilogy has to be my favourite. Following on directly from book two, Salander is hospitalized and charged with attempted murder. Meanwhile Blomqvist turns his attention to the dark forces that have interfered throughout her life.

The book is slow to get going, like it's predecessors, but once page 170 hits it becomes a thrilling roller-coaster of surprising revelations in a plot so complicated that it is utterly believable. There are a couple of character building sub-plots that seem to have little relevance though and feel a little like padding. I'd like to think they were part of Larsson's set up for the rest of the series that he had planned. Fortunately these plans for an ongoing story don't interfere with this one and it rounds the trilogy off nicely. I do wonder if the last few chapters are added on specifically for rounding-it-off purposes though.

One of my issues with the writing style of the previous novels was the over indulgence in 'product placement' and I was quite glad to see that this had been toned down a lot.

This is an excellent take on a mystery, conspiracy, legal, character based thriller and I only wish that there was more to come. I can honestly say I don't understand why people want to slate these novels. They are an excellent example of modern day storytelling. 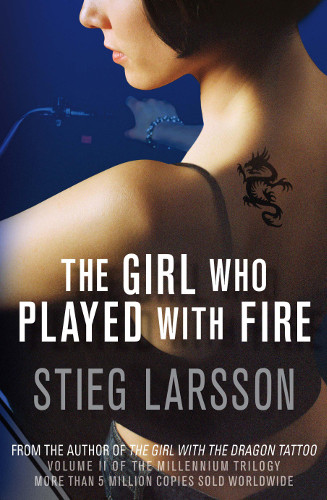 The Girl Who Played With Fire

This book is weird. Like its predecessor there is a mystery that the journalist is setting out to solve, but this time Salander has become the suspect rather than the investigator, and the reader is stuck in an awkward position of not knowing the truth. Unlike a traditional mystery, the actual clues are nowhere to be seen, and the actual conclusions rely on insider knowledge that is unavailable to the reader - rendering it lacking in a sense of interactivity.

The beginning is again a slow starter, taking quite a while to get into the actual meat of the plot. The way that the first book ended forces certain events at the start which seem unrealistic, although prove to be vital to a couple of later story points. The beginning also follows the first volumes habit of product placement, which while adding a Swedish focus still distracts from the narrative. Fortunately the author seems to get bored of this style fairly quickly and the brand names become slightly thinner on the ground. Another strange aspect of Larsson's style is an over-reliance on long lists.

The main focus of the novel, once we finally get to it, is actually Salander's backstory. Despite this, the narrative is aligned with many more points of view than in the first novel, including both friend and foe, which makes for a richer understanding of what's going on, particularly where a strange sense of suspense requires one character to disappear from the reader for significant portion of the book. There are some elements though which make you wonder 'why was this not mentioned before?'

Is it a good book. Yes, I enjoyed it, but I don't think it's as good as the original. It's quite a different concept plot-wise, being much more a character piece than a mystery, but still worth a read. The ending of this one is at polar opposites to the first, which made an effort to tidy up the lose ends and let you know how the characters got on. This one is abrupt and almost disappointing, and clearly leaves things hanging for book three. 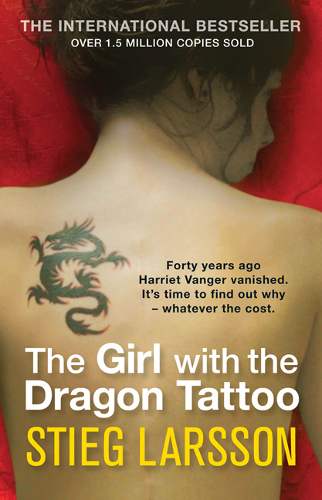 The Girl with the Dragon Tattoo

This is a weird book. For a start it uses some weird language, but then it is translated from Swedish so many idioms may not translate naturally. The characters are weird too - some less than others - in fact the character who is meant to be the weirdest seems to actually be the least so by the end, as everyone else has become weirder still. The weirdness is magnified in their sexual practices - either Sweden is very liberal or this author is a bit mad.

The plot has a very good idea behind it, though at points it becomes extreme, and is the main positive point about the novel - the drive to continue reading is from wanting to find out how the plot continues. The characters are mostly surprisingly likeable, despite their odd natures, but seem to be a little two dimensional in places - while in others they seem to act contrary to their established nature.

The strangest thing about this book is that it is full of what appears to be product placement. In one section the author spends half a page extolling the virtues of a particular model of laptop, and in others recommends software, authors etc. This seemed really out of place in a novel and was quite distracting form the serious nature of the plot when you are suddenly confronted with a list of technical specifications.

It's not well written - well, not in English anyway - but is compelling, and is certainly better than anything Dan Brown has produced. It is very definitely mainstream fiction, as its sales figures would suggest. It's just a bit of a romp really with some rather extreme practices thrown in. I'll certainly read the sequel, but I'm not sure it's one I'd recommend to my friends, and certainly not to my mum.