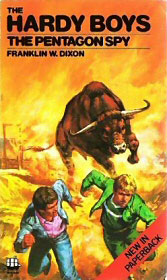 First valuable antique weather vanes are stolen in Pennsylvania Dutch Country and Frank and Joe are hired to catch the thieves. Meanwhile, their father is asked to find a missing Navy employee and a top-secret government document.

The third of the Hardy Boys Digests sees the brothers get caught up in a complex and serious case that their father is working on. In some respects, probably the most serious and high profile case of their career.

Simultaneously however they also have another case, the case of the stolen weathervanes, and I can’t believe they didn’t go with that as the title.

Joking apart, it actually feels like one of the most robust plots of the series so far, and I quite enjoyed the blend of history and the modern day.

However the book also has the usual problems, a bunch of body shaming, some bad politics, and the standard set of tropes that might be expected from the Hardy Boys.