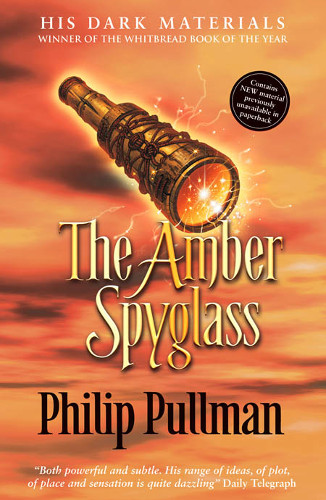 Lyra lies sleeping in a cave near a rainbow, drugged into unconsciousness by her mother, Mrs Coulter, whose love for her daughter closely rivals her own ruthless ambition. Now, the latter threatens to overcome the former, as she strives to prevent the events which are dependent on the decisions Lyra is fated to make. Meanwhile, Will - scarred and traumatised after his last, fatal meeting with his father - seeks blindly for her, with only two of Lord Asriel's angels as companions on his dangerous search.

The third and thankfully final book in the His Dark Materials trilogy completely failed to grip me, to the point where I had to give myself a reward of reading a chapter of another book after each chapter of this one. The Amber Spyglass sees Lyra and Will separated, as Will and the other diverse array of characters travel their separate routes towards a rather lackluster conclusion.

The writing style is awkward, with language that feels much more dated than I thought appropriate, and nothing that gave me an urge to continue. Similarly the plot seemed lost and wandering in circles for much of the book and it didn't feel like a self-contained narrative at all.

What I did enjoy was the world-building that Pullman does to create a world of diamond-shaped creatures, and particularly the society of the Mulefa. I previously found the worldbuilding to be the best elements of the first book in the series, and when creating another world here he is at his best.

Overall though I found it dry and tedious. My decision not to read the trilogy when it was originally popular was clearly the correct one, and I'm glad it's now over.