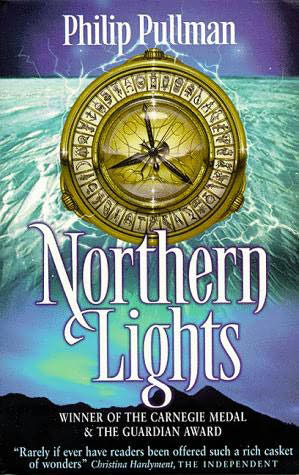 Lyra Belacqua and her animal daemon live half-wild and carefree among scholars of Jordan College, Oxford. The destiny that awaits her will take her to the frozen lands of the Arctic, where witch-clans reign and ice-bears fight. Her extraordinary journey will have immeasurable consequences far beyond her own world...

Northern Lights and the rest of the 'His Dark Materials' triolgy passed me by at the height of their popularity and only now have I got round to reading this first installment. Lyra is a young girl living in an Oxford college in a universe slightly different to our own, in which each person is constantly accompanied by their own 'daemon'. When children around the country begin to disappear, Lyra is unknowingly drawn into her destiny.

I'm not really sure what to think of the book. While I enjoyed reading it, I did find it hard-going and did not have the usual urge to keep reading at the end of each chapter. The writing style is quite classical, and perhaps it is this, to which I am not used, which is reducing my attention span. The language seems also to be a strange mix of high literature and children's novel that in places steps a little close to patronizing.

The worldbuilding elements were perhaps my favourite parts, with the daemons in particular coming across really well as an element that would obviously be unfamiliar to the reader. The actual story less so - it has a very episodic structure which moves on at quite a fast pace, with what I felt was too little continuity bridging the sections. In contrast perhaps, the overall plot doesn't really stand alone as its own story, with no sense of having completed anything at the end. I assume that this is because the trilogy is meant to stand as a single work, but it leave a disatisfied feeling after reading just one part.

Overall, I think I'm going to have to read the sequels before making a final decision on how I feel about this book.