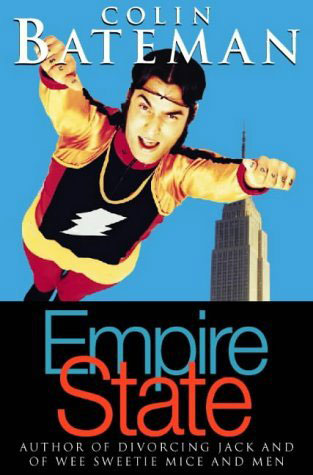 It's bad enough having a name like Nathan Jones - unless you're a Supremes fan, which Nathan isn't - but when his girlfriend leaves him (for a drag queen) and he gets mugged, then handcuffed to a bed and cut up in a misunderstanding with an S&M hooker, it looks as if things can't get any worse for this exile in the Big Apple. But they can.

This is the second of Bateman's novels which I have read, and I must confess I feel pretty much the same way as I did about the first. While it's an interesting set-up and the characters occasionally show promise, I just wasn't able to connect with the novel and found I had to force myself to keep going through the second half.

Nathan Jones is a Northern Irish immigrant into the USA, and has a bit of a temper problem. When his girlfriend leaves him, he's left with just his security guard job at the Empire State Building, and a whole range of implausible coincidences that bundle on top of him.

I'm quite surprised by how I feel about the book, because Bateman's work is in many ways similar to that of Christopher Brookmyre, whose novels (Scottish instead of Northern Irish) are also of the slightly black-comic crime genre, but Bateman's plots and characters just don't seem to fit together quite so well.

In this book, the plot didn't seem to connect particularly well - there was too much going on, particularly some which was just complete distraction, and one element in particular cropped up very suddenly with no warning to provide a quick deus ex machina and extend the story by a few extra chapters. The humour was quite faintly sketched in over what is really quite a tragic tale, and the variety of sexual acts surprisingly frequent.

Overall, I'm afraid it's not a book I can recommend, which is a shame because it was recommended to me. I'll stick to Brookmyre in the future and try to resist the allure of some of Bateman's other tempting titles.