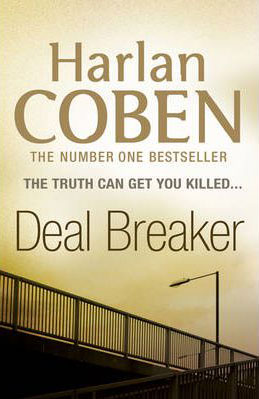 Investigator and sports agent Myron Bolitar is poised on the edge of the big-time. So is Christian Steele, a rookie quarterback and Myron's prized client. But when Christian gets a phone call from a former girlfriend, a woman who everyone, including the police, believes is dead, the deal starts to go sour. Suddenly Myron is plunged into a baffling mystery of sex and blackmail. Trying to unravel the truth about a family's tragedy, a woman's secret and a man's lies, Myron is up against the dark side of his business - where image and talent make you rich, but the truth can get you killed.

Harlan Coben's first Myron Bollitar novel is a mixed bag. When american footballer Christian Steele gets a message from his girlfriend - who disappeared 18 months earlier - he recruits his sports agent to try to track her down. This summary is the basis of my initial scepticism about the book - the character just didn't seem to fit the plot, and that element remains to be satisfactorily explained.

The beginning of the book is weak, which put me off - after each of the first few chapters I was seriously doubting whether I could bring myself to continue reading. The characters were ill-defined, cocky, and the narrative informally, almost colloquially phrased. But it did get better, mostly through the application of the plot, because the above criticisms remained throughout.

The story, although dubious in places, is what drove me to keep reading, and possibly just because I wanted to find out what was going on. Unlike a classic crime novel, there's very little by way of clues - indeed the first half felt more like a treasure hunt, going from one contact to another, picking up the next name, and carrying on, without feeling as if much was being learnt. Eventually though some clues start to come to light, and the reader is just about able to figure things out in time.

The writing style is awkward though - it's too casual, with the narrator making observations that seem better suited to put with a character. There were also places where two pages got stuck together and it was surprising how far I could read on before realising that it was a completely different scene I had jumped into the middle of. The characters are larger-than-life and I found them hard to relate to - particularly the protagonist - and his reactions to situations are unbelievable to an extreme, it's almost like he's a child who doesn't understand what's going on around him.

Finally, there are a number of scenes that appear without much justification except to titillate. I found them unnecessarily intrusive and they didn't contribute to the characters or plot. Overall, I enjoyed the book for the plot, and I imagine I will try to read further into the series, which I've been told has its ups and downs, and hope that they become slightly more bearable.