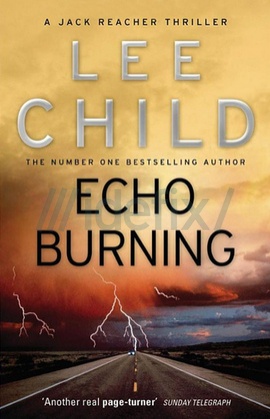 Jack Reacher - six foot five and dangerous. Adrift in the hellish heat of Texas. Moving like a shark in the water. Looking for a lift through the vast empty landscape.

A Cadillac stops. A ride, but with a hitch. A pretty young woman, alone. Her husband's in jail. When he comes out, he's going to kill her.

Her family's hostile, she can't trust the cops, and lawyers won't help. Reacher is her last option. Will this be the first time he says no - to a lady in distress?

Lee Child's fifth Jack Reacher novel is set in Texas, with Reacher back on the road in the style of the first two novels, where he comes across a 'damsel-in-distress' in the form of Carmen Greer, who wants Reacher to kill her abusive husband.

It's nice to have a novel back in the original style, where Reacher is unattached at the beginning and we see the whole of the events from his perspective. There are a couple of references to the events of previous novels, but only in passing, and these at least enhance the believability of the character.

The other characters that Child introduces are a good range of well defined personalities, including slipping in a Grisham-esqe young lawyer along the way. The Texan locals are possibly a touch too stereotyped in their red-neck-edness, but for all I know this could actually be true - though to a modern Brit this seems a little unbelievable.

The plot actually starts out quite slowly, and it was only about halfway through that I realised it was meant to be a mystery story. Once that dawned however working it out was relatively simple, although Reacher's investigation seemed to move at a good pace and didn't lead to reader frustration at the inability of the protagonist to see the obvious.

My only remaining criticism is of Child's repeated description of Texas' weather as hot. Yes, it is probably accurate and serves to set the scene but comes to seem like a cliché given the number of times it is mentioned. Overall, a good entry in the Reacher canon and getting back towards the strength of the first two novels.