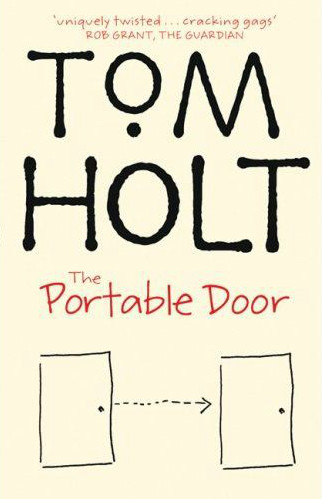 Starting a new job is always stressful (especially when you don't particularly want one), but when Paul Carpenter arrives at the office of H.W. Wells he has no idea what trouble lies in store. Because he is about to discover that the apparently respectable establishment now paying his salary is in fact a front for a deeply sinister organisation that has a mighty peculiar agenda.

I was actually attracted to Tom Holt's novels when Amazon recommended me 'May Contain Traces of Magic', but as that appears to be the latest novel in a series, I decided to start here with the first novel.

'The Portable Door' is the tale of Paul Carpenter, who has given up hope of ever finding a job or a girlfriend, when suddenly the opportunity for both come along at once. It's just a shame that his new employer has forgotten to tell him exactly what they do - and that he has to try very hard to ignore all the strange goings-on in the workplace - not least the question of where the long stapler has gone now.

I wouldn't say that this novel is 'laugh-out-loud funny', but it does have it's moments, and I'm not particularly prone to laughing at novels. It takes a little while to get going - in fact it didn't really grab my attention properly until about halfway through, and was only gripping in the final quarter. The characters started off rather unlikable - there was nothing in Paul that I could really identify with, particularly as he didn't seem to have any sense of curiosity at all.

When it did pick up though was where things finally began to make sense. Until that point Holt had expertly crafted the confusion - dropping in all the different elements in a seemingly natural way without making it obvious to the reader what those pieces would make when put together. In a way it's similar to the Dirk Gently novels of Douglas Adams. Then at the conclusion everything is pulled together and tied up nicely, before you are thrown into confusion again.

I had my doubts initially (particularly as the story I found myself reading bore only a superficial resemblance to the blurb on the back) but it picked up, and I'm definitely in the market for the sequel.