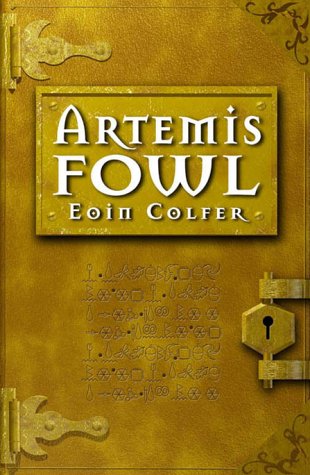 Twelve-year-old Artemis Fowl is a brilliant criminal mastermind. But even Artemis doesn't know what he's taken on when he kidnaps a fairy, Captain Holly Short of the LEPrecon Unit. These aren't the fairies of bedtime stories. These fairies are armed and they're dangerous. Artemis thinks he's got them just where he wants them, but then they stop playing by the rules...

I picked up this one in a charity shop because Eoin Colfer (who I had always thought was called Coifer) has been announced as authoring the new H2G2 novel, 'And Another Thing...', and I was interested to see what he was like.

Overall, Colfer's writing ability does show through, but this particular novel did little to excite me. Yes, it is aimed a childrens' market, but so were Charlie Higsons' Young Bond books, and J K Rowling's Harry Potter series, both of which I found engaging and entertaining.

Artemis Fowl however seems to live in a rather two dimensional world. The fairy world isn't explained in enough detail for me, and doesn't seem very real. We're aligned with Fowl, his Butler, and two of the fairies for different parts of the narrative, and I felt that this took away some of the suspense and mystery that could have been generated by being aligned with one character.

In terms of the plot, it was fairly straight-forward, with nothing unexpected, and nothing very deep. So all in all, I think Colfer should be a good author to continue H2G2, as long as he knows that he's targeting an older audience. I don't think I'll be picking up any further books in this series though.