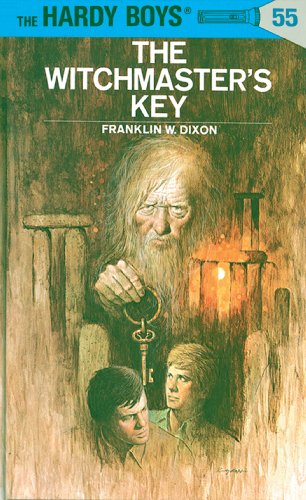 There is not time for explanations when Mr. hardy telephones Frank and Joe form the West Coast and sends them flying off to England to help his old friend Professor Rowbotham. Their stay in East Anglia begins with a weird omen, as they witness the bizarre funeral of an old witchmaster. From then on, strange things happen. When the Hardys learn about the strange disappearance of Lord Craighead, the plot deepens. Danger follows them to Ireland as Frank and Joe survive a shipwreck and find a clue from a frightened white which that leads to the torture chamber of a black witches' coven, all in search of the telltale Witchmaster's Key.

This fifty-fifth book in the series is possibly the most absurd so far. The Hardys travel to the British Isles for an adventure that despite being set in the 1970s seems to depict a society from the 1770s.

I had just been saying in a review from a previous book in the series how amazingly informative it seemed about the countries they were visiting, and I really have to reconsider now that I’ve seen their attempt to depict a location I actually know something about.

The plot is implausibly silly, and really doesn’t hold up at all. The cover art on my copy is also ridiculous, with the least realistic illustration of Stonehenge I think I’ve ever seen - it’s like someone has been given a vague description and not bothered to look at a photograph.

Probably the worst plot in the entire series that I’ve read so far.