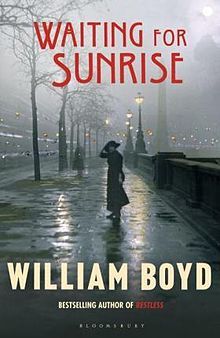 Vienna, 1913. Lysander Rief, a young English actor, sits in the waiting room of the city's preeminent psychiatrist as he anxiously ponders the particularly intimate nature of his neurosis. When the enigmatic, intensely beautiful Hettie Bull walks in, Lysander is immediately drawn to her, unaware of how destructive the consequences of their subsequent affair will be. One year later, home in London, Lysander finds himself entangled in the dangerous web of wartime intelligence - a world of sex, scandal and spies that is slowly, steadily, permeating every corner of his life.

Waiting for Sunshine is the fourth novel I’ve read by William Boyd - and although superficially similar, isn’t really anything like the others. It’s the tale of a man in the 1910s who seeks treatment for a medical condition.

I’m not entirely sure I understand what the book is really about - the plot seems fairly chaotic and unstructured and even having finished I’m not sure I really know what happened. It starts seemingly to be a period spy novel, but it never quite develops in that direction, and instead meanders through a number of plots without a clear goal.

The most interesting aspect of the novel is how the narrative is crafted. The book seamlessly weaves between the first and third person - so much so that I didn’t even notice it until several switches in. This is really cleverly done, and demonstrates a masterful command of the pen on Boyd’s part. Perhaps this is why I feel confused - because in some parts of the novel I have access to the mind of the character and some not - and so I feel I lacked insight in some parts of the plot.

I flirted with the idea of abandoning this book halfway, but I’m glad I didn’t - it continued to entertain just enough to keep me going, though I’m afraid I did enjoy the previous novels of the author’s which I have read.