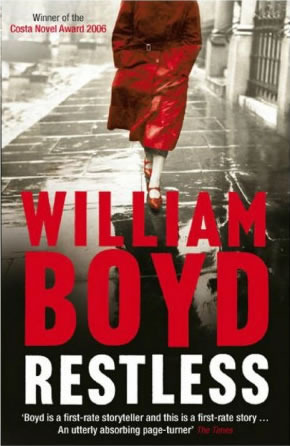 Eva Delectorskaya, a beautiful Russian émigrée living in Paris, is recruited for the British Secret Service by the mysterious Lucas Romer. Under his tutelage she becomes the perfect spy - trusting no one, even those she loves most.

Since the close of the Second World War, Eva has carefully rebuilt her life as a typical English wife. But once a spy, always a spy. Now she must complete one final assignment, and this time Eva can't do it alone: she needs her daughter's help.

Restless is my third William Boyd novel, and continues the trend of being a period spy story - this time with two parallel storylines set some 40 years apart, one the daughter in the 1970s, the other her mother in the 1930s and ‘40s. In a surprise revelation, the mother announces she isn’t who her daughter always thought, and piece by piece explains her true backstory.

I really enjoyed the story, though the writing fees denser than much of my usual fare, and thus it felt like I was able to read less per session. The setting is painted in realistic colours of the era, and it’s really easy to get into the heads of the two protagonists.

Boyd’s approach to the storytelling is excellent - I really liked he way he drip feeds information to the reader in a way that feels like it’s part of the plot, rather than feeling like the author is artificially withholding details. I was also impressed by the narration - which despite being written in the third person felt like it was being told by the characters from a first-person perspective, to the extent that I would be surprised on starting a new chapter to find it in third person again.

An excellent story, excellently told. I’m glad I picked up more of Boyd’s novels and expect I will slowly continue my way through his works.