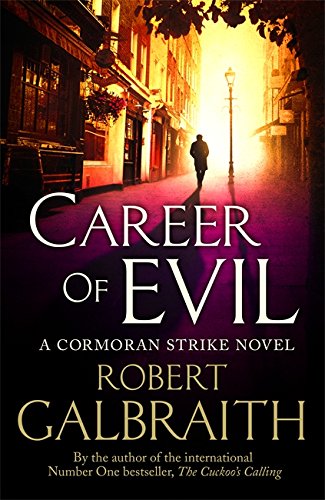 When a mysterious package is delivered to Robin Ellacott, she is horrified to discover that it contains a woman's severed leg.

Her boss, private detective Cormoran Strike, is less surprised but no less alarmed. There are four people from his past who he thinks could be responsible - and Strike knows that any one of them is capable of sustained and unspeakable brutality.

With the police focusing on the one suspect Strike is increasingly sure is not the perpetrator, he and Robin take matters into their own hands, and delve into the dark and twisted worlds of the other three men. But as more horrendous acts occur, time is running out for the two of them.

The third book in the Cormoran Strike series follows the private investigator and his sidekick Robin as their work is interrupted by the surprise delivery of a severed leg. It's another slightly gruesome tale, as you might guess from that description, but not so much as the second book in the series, The Silkworm.

As with many of the authors works, you fall in love with the characters all over again and feel as if you want to die into every aspect of their lives. It's a rich world filled with interesting minor characters who feel as much thought and effort has gone into their creation as the stars. What's nice though, and is different from other stories though is that the characters are not open books and there are aspect of them and their histories that are being slowly revealed as the series progresses.

The plot is convoluted and twists around a varied set of suspects as is typical of a novel if this genre, and keeps moving at a good pace. There's also a lot of good background stuff going on in the characters' lives to forma strong secondary plot which makes the whole thing deeper and more interesting. I'm looking forward tut seeing how some of the events depicted in this novel have repercussions in its sequels.

An enjoyable part three for Strike and Robin's adventures, though perhaps still not up there with the first four entertainment value.