Three to Get Deadly 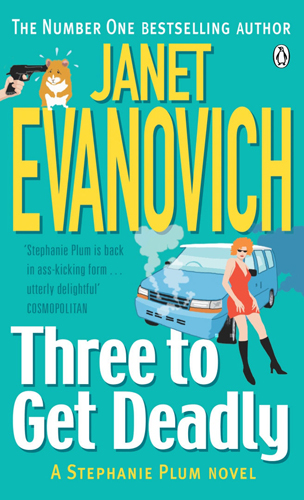 Stephanie Plum's fast becoming the most unpopular woman in New Jersey. Even her own mother can't love her for taking on the job of tracking down Uncle Mo, everybody's favourite candy store owner. Cursed with a disastrous new hair colour and an increasing sense that it's time to get a new job, the world's favourite bounty hunter sets off on her latest adventure, with a little 'help' for her new sidekick, hooker turned file clerk Lula, who's just itching to get a felon in the back of her racy red firebird.

Book three - my favourite of the first three in the series - sees Stephanie Plum, bounty hunter, on the trail of much-loved local personality 'Uncle Mo', who has skipped bail on a minor charge. Typically she ends up mixed up in something slightly bigger and amusingly complex.

The structure of the story is strong, both from the perspective of the 'main' plot and the B story 'soap' plot that Plum and her co-cast of characters follow. I really enjoy the recurring gags and find the light-hearted approach to a crime story very compelling.

One disappointment of this particular novel was the blurb - one of the plot points mentioned didn't come to pass until relatively late and even then didn't turn out as momentous as the back cover had implied. If it hadn't been called out, I wouldn't have been watching for it all the time and distracted from what was actually happening.

I'm glad this was better than book two as I've got a shelf (well, technically a box at the moment) full of later books in this series and now can look forward eagerly to picking them up for a light escape every now and then.