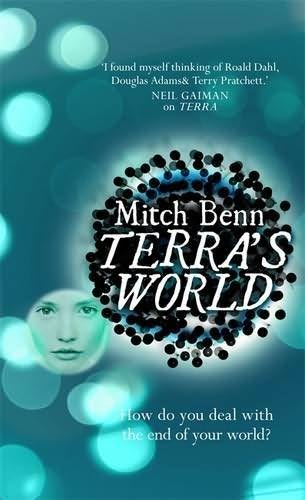 Terra is a couple of years older and back on earth. She's in hiding. But none of this is known to Billy Dolphin. He's just annoyed that since Terra returned to Earth Science Fiction has died a death. How wrong could a teenage boy be?

Terra, the delightful title-character of Mitch Benn's first novel, which I absolutely adored, returns for a second outing in this novel, where someone is out to get her. While the narrative retains a lot of the humour, food for thought, and science fiction of the first story, it didn't quite manage to grip me in the same way.

This book introduces a lot of new characters, and I felt one of its drawbacks was that we didn't focus on any specific one, but that the attention was shared so that we got some of each character rather than an in depth look at one or two. This may however have been necessary to deliver the plot, which is quite a good science fiction adventure, and introduces some interesting and unexpected twists.

I really liked how the story grows out of the events of the first novel, and doesn't feel like it had been done purely for the sake of a sequel. As a whole, the book makes for a good strong sequel, though I didn't think it had quite the magic of the first book.