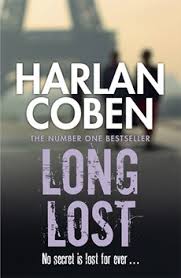 Myron is summoned to Paris at the behest of an old lover, Terese. She is in unspecified trouble and needs his help. When he gets there, he discovers that her husband has been murdered and she is the main suspect. The interesting thing is that more than one blood-type has been discovered at the scene - and the other blood can only be attributed to her daughter. But she died 10 years before.

As Myron and Terese try to find out exactly what's going on, they uncover more and more questions. Did the daughter really die? Did Terese's husband have a further child with someone else?

But the truth is something no one expected.

The ninth Myron Bolitar adventure is the most serious and surprisingly dark of the series that I've read. Bolitar is summoned to Paris by an old flame and becomes embroiled in an investigation that spirals completely out of control.

The whole plot takes on a very serious angle that seems out of keeping with the comic style that marked out the earlier novels as being 'Hardy Boys for grown-ups'. There are moments where the banter between the characters remains, but it seems out of joint with the nature of the story which feels more like something from one of the author's straighter crime novels.

I wasn't that impressed actually - it's not what I was hoping for with another Bolitar adventure, which I associate with a bit of a lighter experience (though it's still modern crime rather than armchair detectives). I preferred the originals, and hope that the next (and to date final) book in the series is more in keeping.