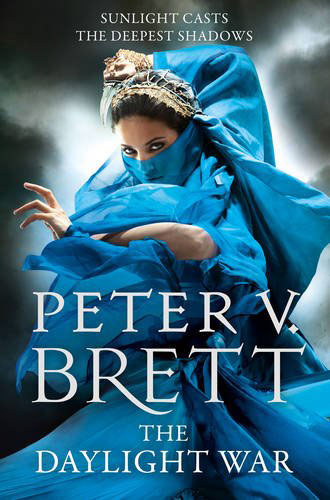 Humanity has thirty days to prepare for the next demon attack, but one month is scarcely enough time to train a village to defend themselves, let alone an entire continent caught in the throes of civil war.

Arlen Bales understands the coreling threat better than anyone. Born ordinary, the demon plague has shaped him into a weapon so powerful he has been given the unwanted title of saviour, and attracted the attention of deadly enemies both above and below ground.

Unlike Arlen, Ahmann Jardir embraces the title of Deliverer. His strength resides not only in the legendary relics he carries, but also in the magic wielded by his first wife, Inevera, a cunning and powerful priestess whose allegiance even Jardir cannot be certain of.

Once Arlen and Jardir were like brothers. Now they are the bitterest of rivals. As humanity’s enemies prepare, the only two men capable of defeating them are divided against each other by the most deadly demons of all: those that lurk in the human heart.

The third book in Peter V Brett's Demon Cycle feels like the biggest of the lot - it just goes on and on, and it felt like it took much liger to read than other epic fantasy novels I've read recently.

The story continues from the end of book two, intermixed with flashbacks to earlier scenes from the life of Inevera, mirroring the introductions to other characters in the earlier stories and providing a fascinating second viewpoint on a number of scenes that the reader has already witnessed. In fact, I would have appreciated even more of this, as some of those parts felt a little glossed over where I would have enjoyed more detail.

Back in the 'present' we follow the characters as they prepare for 'The Daylight War', building to a surprise climax that I didn't see coming - partly because it didn't arrive until quite late and felt very quick and abrupt. Like in some other books, I struggled a little with the fighting / battle scenes - I think that my limited visualisation when reading doesn't help, but some authors still seem to come over better than others.

It's a great continuation of a good series and I'm particularly pleased with the way we keep getting new viewpoints added and are gradually dropped more information about the world in who b the stories are set. Looking forward to reading more.4