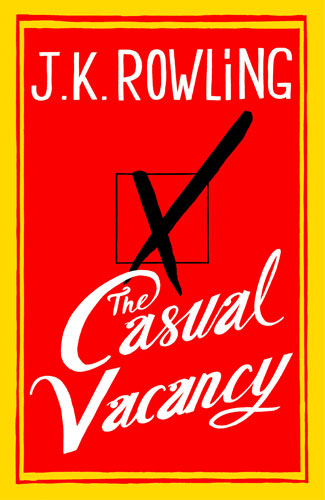 When Barry Fairbrother dies in his early forties, the town of Pagford is left in shock.

Pagford is, seemingly, an English idyll, with a cobbled market square and an ancient abbey, but what lies behind the pretty facade is a town at war.

And the empty seat left by Barry on the parish council soon becomes the catalyst for the biggest war the town has yet seen. Who will triumph in an election fraught with passion, duplicity and unexpected revelations?

JK Rowling's first book for adults depicts life in the village of Pagford, where the untimely death of a parish councillor throws the local populace into complete disarray. Rowling proves that she's not a 'one trick pony' as she explores the lives of an ensemble cast of characters who live surprisingly believable lives.

The book opens well, quickly introducing a range of characters between whom the buck of narrative alignment is passed throughout. The author demonstrates a way with descriptions that paint an amazing picture of the setting in the reader's mind - something that I had forgotten about her previous works since the images from the movies had taken their place. Her skills at building an entire world - though this time on a slightly smaller scale, continue to astound.

It's certainly aimed at a more mature audience, with plenty of sex and drugs and choice language throughout - perhaps many of the things that she was unable to mention in her earlier children's novels coming through. The blend of subtle comedy and gritty realism is just right, with the plot light enough not to put the reader off while dealing with a number of serious issues - all of which she manages to depict authentically and compassionately.

Although there were places in the middle of the book where I felt it was dragged out a little and it was unclear whether the plot was going anywhere, overall the complexity of the story and richness of the range of characters is the most captivating element and I was saddened every time I had to put it down.

To me, this proves Rowling's position as one of the great contemporary authors and, although its never going to be as iconic as Harry Potter is an amazing book that is both entertaining and thought-provoking. Although it seems unlikely there will be a sequel, it only encourages me that there may well be more amazing worlds and stories to explore from JK Rowling.