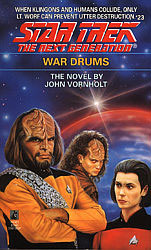 The planet Selva - a lush colony world settled by a hardy group of humans, who found the planet already inhabited by a small gang of young Klingons. When violence erupts between the two groups, Captain Picard and the U.S.S. Enterprise are sent to render assistance. Worf leads a landing party to the planet while the Starship Enterprise is called away on another urgent mission. On Selva, Worf and his party find that the old hatreds and prejudices between humans and Klingons are revived, and the settlers are out for blood. Now, Worf must prevent a horrible massacre, before all of them fall prey to Selva's deadly secret and raging fury.