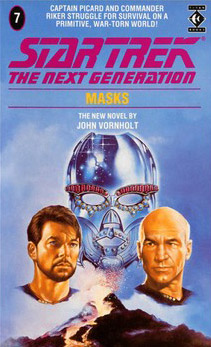 On the planet of Lorca, Picard and his party lose contact with the ship and Commander Riker leads a search party to find them. But both men are unaware that their searches are part of a madman's plan - a madman who is setting a trap that will leave him poised to seize control.

A Star Trek: The Next Generation novel from (probably) the late 80s - set during the second season of the TV show (as evidenced by the presence of Dr Pulaski) and seeing Picard and several of his crew marooned on a planet where an old Earth colony has evolved into something resembling mediaeval Europe.

The plot is interesting and keeps moving at a good pace - there’s multiple threads going on and lots of the characters get to play. However it also feels a bit odd - there’s a visiting Ambassador who is typically troublesome, and this feels like it’s a bit of an over-used Trek trope.

John Vornholt has, following this novel, written quite a few Trek novels, several of which I’ve read - but it’s quite clear in this one that he’s in his early days of familiarity with the TNG crew. There are some elements which are clearly just things that the series hasn’t addressed yet, so they weren’t contradictions at the time of writing - but others (such as using the letters JG in ‘Lieutenant JG Worf’ as if they are the character’s initials rather than part of his rank) that wouldn’t slip through the net today.

So, not a perfect novel, and one that feels slightly dated having seen what the whole of TNG is like (well, to date) - but still an entertaining one that’s worth reading even if you aren’t a completionist.