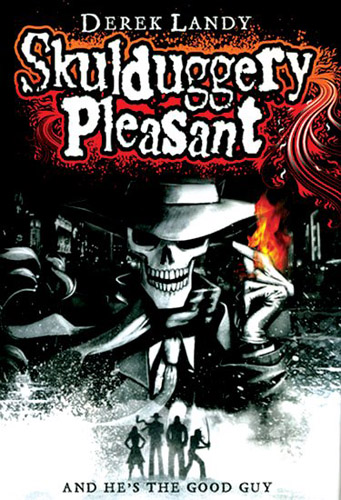 For years I've seen this series of books floating around libraries and bookshops, and wondered what it was all about - so this time I picked up a copy fo the first novel - and now I've found out.

Stephanie is an ordinary child until the day she meets a mystery man named Skullduggery Pleasant, who turns out to have been dead for quite some time, but remains rather animated despite this. And thus she is drawn into an amazing undercover fantasy world full of good, evil, and something in between.

To me it felt... average. The tropes felt pretty samey, and the magic system weaker and less well explained than some. The narrative was a little rough, and I found my attention drifting fairly often, to the point where my eyes would pass over multiple paragraphs without taking anything in. One chapter in particular struck me as reminiscent of Benedict Jacka's Alex Verus series, and one monster reminded me strongly of something out of Ransom Riggs' Miss Peregine's Peculiar Home for Children (both of which I appreciate were published after this novel).

While it was a diverting read as a filler between parts of an epic fantasy, I didn't feel hooked, and I don't expect to be continuing with the later books in this series.