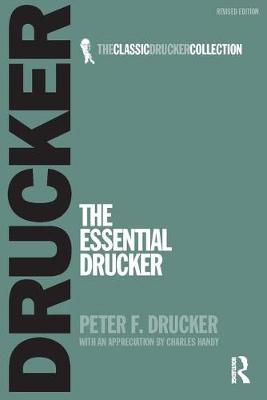 The Essential Drucker is a heavily edited version of the highlights from all of Drucker's works. Peter Drucker is described in the opening 'appreciation' as the inventor of management, and seems to have spent a career ranging from the 1920s to the 1990s studying management and providing advice. This book was created by editing together all his books into one central repository of all his best output - first by a Japanese editor into three volumes, then again by an American editor into a single volume.

The book is structured in three major sections - management as a concept, the individual as a manager, and society.

There is a wealth of good advice contained within these pages which I feel could be beneficially applied by managers today in the late 2010s. Drucker begins by attempting to define business and management, and the roles of management. He advises that the top focus of senior management should be to define 'what should our business be' and to set objectives in a number of areas of the business, none of which should mention profit, in order to give clear direction to everyone working in that business.

He talks about making it clear what roles have what responsibilities - the division of power between CEO and board - and wanders into talking about the role of business in society, a theme which runs through the book. Then from chapter six the advice becomes increasingly practical.

People need to understand the organisation structure, it needs to be clear who makes decisions, and that nobody should have two masters, which would create a conflict of interest. Managers need good information, particularly to understand the costs of what they are doing end-to-end through their entire supply chain, which means data from outside the direct business as well.

Drucker advises again about how important objectives are, and that management by 'drives' or 'crises' is bad. He proposes a methodology for creating objectives and ensuring they are understood between senior and junior managers, and advises self-control and the importance of ensuring managers have the data they need to self-manage.

He gives advice about recruitment and building a team, particularly about knowing when a role is wrong rather than the people being put in it. He talks about innovation and entrepreneurship, and suggests some approaches to ensuring innovation is continuous. And then he gives advice on how to set up a new venture, and to ensure you are focussing clearly on the market, rather than your own preconceptions of your product.

For the individual manager, he gives advice about how to be effective, which he views as the key element to management, and spends a number of chapters teaching how to approach this. The first key is to know oneself, focussing on one's strengths and forgetting about improving other areas, understanding how one works best and structuring your work to maximise that methodology, and ensuring one works somewhere with values compatible with one's own.

He spends a long time talking about time management, and gives some fairly brutal advice on how to best do this. First by understanding how you currently use your time, then by brutally attacking it. Grouping common tasks to avoid context switching, not rushing 1:1s, and not bothering to do anything that wouldn't be missed. He advises turning recurring crises into routine, argues that spending more than 10% of your time on staffing means you have too many staff, recommends no more than 25% of time in meetings (meetings mean you are trying to gain consensus, which implies responsibility is too diffuse and should be consolidated down), and speedier access to information.

The big recommendation he makes is to consolidate discretionary time - so pushing everything that takes you away from your desk together so you can have solid long blocks of time to focus.

He explains his approach to decision making and how to communicate. And then he advises about life, and what to do with the second half of your life, which is fascinating as it's something I'd been thinking about. He says to plan ahead earlier with what you want to do next, likely outside of your main career.

The final society section seems limited in it's advice and feels more like rumination about history and the future.

However, along with all the good advice, Drucker really falls down in his presentation in a number of ways.

The book opens with an 'appreciation' - it's a gushing hero-worshiping opening which does nothing to make me like the author, and coupled with the introduction begins the thread of capitalism, small government-loving, sexist, racist, America-Centric, closed-minded and old-fashioned writing which runs through the entire book.

It feel so unnecessary to make a book about advising managers so political, taking every opportunity to denounce unions, Marxism, Liberal Arts, the left-wing, Ralph Nader, jazz, the working class, non-white people, the welfare state and socialism.

There are some very strange choices of language as well, invoking the Christian god in some places that seemed incredibly out of place, and strangely idiomatic for a book that claims to have been translated into Japanese and back.

Every chapter seems to drip with sexism - referring to managers as 'he, and increasingly she', mentioning housewives, and talking about meetings which are 'three men and a secretary'. There are a number of praising case studies around the Girl Scouts of America, but against the backdrop of sexism it feels like these have been chosen out of surprise that an organisation run by women on a voluntary basis can actually be a positive example of good business practice. Some of the sexism doesn't even seem like it's a product of the time the book was written, but just dropped in with no justification at all.

The peak has to be in chapter 22, when Drucker actually compares feminists to Hitler. It's not a good chapter and attempts to set up the 'intellectual' as the nemesis of the manager. It's written from a very manager-centric viewpoint despite claims it wants balance, and contains a massive explicit assumption that the ways of Western-society are best and will dominate forever.

So overall, the book contains good advice, but bad language and a bad world-view. I can't in good conscience recommend reading it - it was hard work, took up too much of my time, and in places made me angry.

Given another edit to bring it up to date, remove many of the unnecessary word/phrase choices, and to add more recent case studies, I could see it being a useful read.

In the meantime I suggest finding a summary of the good advice and just following that.