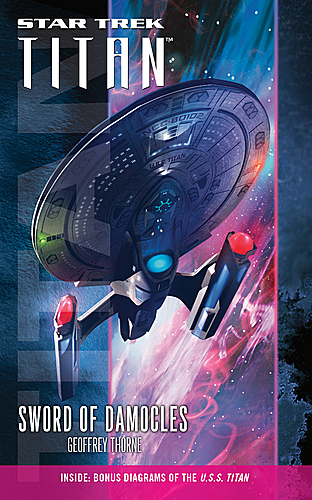 Finally, a Titan novel I actually enjoyed! This one was very different from the previous three novels in the series - there's very little direct contact with aliens, and it's closer to the new characters, focusing on one or two of them in particular.

Thorne has pulled the series in a new direction, looking more at the 'humanity' of the characters, and it seems more in the style of Deep Space 9... and I don't mean just because it focuses on a Bajoran, but because it deals with issues of faith, destiny and sacrifice.

It's more emotionally charged, not least because everyone thinks everyone else is dead. And this leads to characters making decisions that they wouldn't normally, and yet they feel completely rational.

The focus on the new characters is good this time round, with the established and human characters mostly being relegated to sub-plot. I'm enjoying the interactions between the younger members of the crew, particularly the Cardassian cadet.

A good book, but not all of my favourite toys make it back to the box. The description above, taken from a certain shopping website, is rather inaccurate.