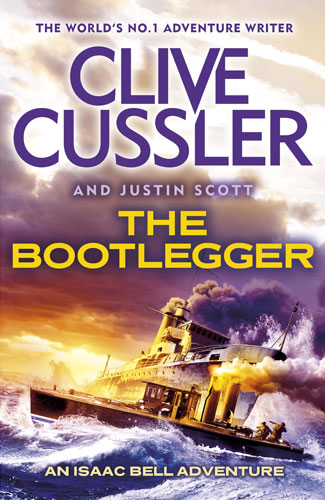 Back to Isaac Bell's 'present' of 1930s prohibition-era America, as the private detective is drawn into investigating some smugglers which turn tangentially into a barely explained and somewhat difficult to follow plot to take over the world.

The attitudes of some of the characters feel quite anachronistic, particularly in relation to prohibition, though I freely admit to knowing very little about the period of American history. This makes the novel feel slightly silly in its approach, as the characters' morals seem to change from scene to scene. Some of the minor characters that are introduced seem really interesting at first but then are followed up weakly - the book could easily have benefited by exploring them more.

The plot starts well, dealing with issues of the time and feeling like the events a detective agency would be involved in, but then I think it goes over the top and starts to move beyond believability. I know it's listed as a thriller and that's what Cussler is known for, but the whole setup seems to beg more for a mystery story. As it is, the audience are aligned with the baddies far too much and so there's little in the way of tension as we know pretty much how things are going down ahead of time.

One exception was the climax, where the book seemed to be setting up one form of showdown but then gave something that I felt was rushed and weaker. Overall, I could say it was a little disappointing, but actually it's more of a surprise now when I really enjoy a Cussler novel, so I suppose this is now just standard. 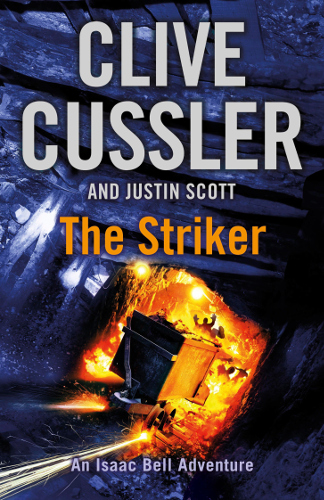 A prequel to the Isaac Bell series, this book shows the private investigator tackle one of his earliest cases, investigating sabotage in America's coal mines in the early twentieth century.

The style is slightly more similar to the first book of the series, though overall the book doesn't live up to that predecessor and is far from the best from the Cussler brand. The book continues the Bell series' slightly political commentary, with Bell himself seemingly possessing modern sensibilities and liberal-leaning beliefs that feel out of place in the era the stories are set.

The plot feels bitty as Bell and the other characters dart around from city to city. The scenes don't seem to flow together particularly well and a lot of the action seems disconnected and it feels almost like random luck that an overall storyline emerges at all.

I didn't find this one to be a captivating book, and generally think it reflects badly on the series that a book can be written with no believable peril or thrill. 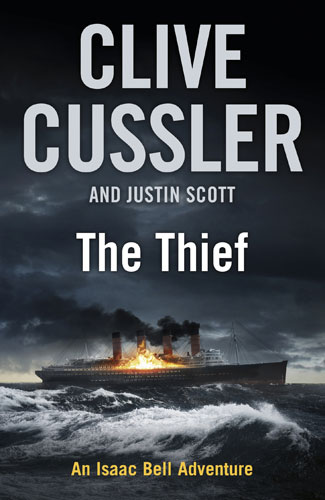 Isaac Bell returns for another early 20th Century adventure. As the German war machine is building, they attempt to kindap two scientists from a trans-Atlantic liner, but Bell can't fathom why.

This is far from the most exciting of the Isaac Bell novels, with actually surprisingly little by way of action and much more investigation, but as such it feels like a better constructed plot. It does lack the trademark technological focus of some of the earlier stories which focussed on cars, trains, planes, though there is a little of this in the treatment of early film production.

Despite this, I'm continuing to enjoy the Bell stories more than Cussler's other spinoffs. Perhaps it's the historical setting, but I notice less of the plot holes that appear in the modern-day stories and things seem much more believable.

It's also worth noting that there are a number of typos in my copy - I wonder whether the extreme three-month turnaround between books is making the proof-reading process rushed. I find this quite irritating in a novel as it tends to break me out from the flow of the story. I also find the illustrations laughable and filled with spoilers - what's the point of showing me a picture of a pivotal scene that hasn't happened yet?

Overall, a well constructed story that could perhaps do with a tiny bit more excitement. Cussler's output has yet to return to its peak but has definitely picked up from recent lows. 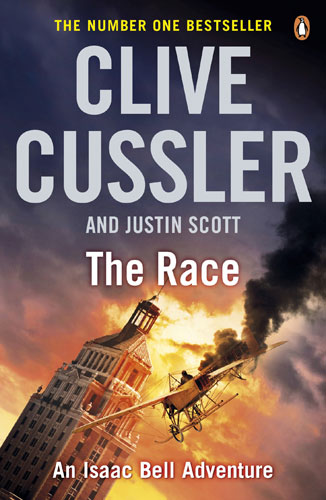 Clive Cussler's early 20th Century detective Isaac Bell returns in what has to be one of the better of his adventures. After flying ace Josephine Josephs is the victim of an attempted murder, by her husband, Isaac Bell and the Van Dorn detective agency are recruited to protect her as she attempts a cross-America air race.

The plot actually works quite well, although there are a few twists along the way that make the story so far seem a little redundant. The use of early aircraft neatly fits into the sequence of Bell stories that have already covered trains, cars and boats, and the 1900s setting sets it apart from the other series of books released under the Cussler 'brand'.

Sadly it's not all great and parts of the novel seem rough. There are mistakes in the use of the title of a British baronet which perhaps wouldn't be noticed by a US audience but really throw me out of the flow every time they crop up, and the repeated meme of having characters called Josephine Josephs and Steve Stevens feels lazy. I'm also bugged by how little growth there is for the main characters - in the first book of the series Bell changes, but since then he's been a static player and his relationships haven't moved on.

Overall though this is certainly the best of Cussler's current output and put the modern day spin-offs of his Dirk Pitt series to shame. The adversary in this story is realistic and pitted at a perfect level to provide a nemesis for the investigator. A slow start to the narrative maybe, but once it got flowing the twists did keep me interested. I had almost decided to drop future Cusslers from my reading list but this has convinced me that the old genius might be starting to peek though again. 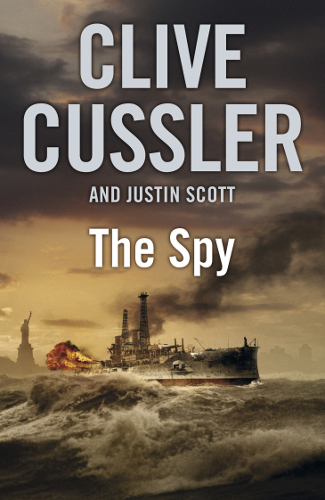 Isaac Bell's investigation into a weapons designer's death turns into an early attempt at US counter-espionage as he battles with the agent known as 'the Spy'. It's a disappointing twist which takes what was a promising series of historical detection into something more akin to a modern day thriller.

The previous Isaac Bell novels have focussed on investigating murder and sabotage - this is the first time the crime has become one of international warfare. Bell's character is more and more anachronistic, and seems to be written as a modern thinker in a backward world. The story goes out of it's way to include anti-Semitism that Bell is quick to refute, but it is entirely unnecessary to the plot. In several of the action scenes Bell seemed to almost become Juan Cabrillo, the main character in Cussler's Oregon Files series, to the extent that at some points I was confused by his lack of false leg.

Unlike the previous two novels, which were very much train and car based, this one stars boats. While this is more the traditional Cussler arena, it felt out of place. The characters have become less well defined. Bell is no longer an ace investigator hunting his prey, but more bumbling along making very little progress until 'the spy' reveals himself. Marion has become a famous film director (which seems implausible for a woman of that era), and although conveyed for the most part as a strong modern female suddenly goes soppy at the end.

The title character is irritating in the way he is played. Throughout he is referred to just as 'the spy', as if to justify the book's title, even when we know who he is (although as we later find it is to keep his alter ego from us), which is really grating. The book continues the idea of having an epilogue set years later, which before has served to wrap up loose ends, but this time it's completely redundant to the plot. Another chapter dealing with the immediate aftermath would have been more satisfying.

Overall then it's a fall from the lofty heights of 'The Chase' - the first Isaac Bell novel - and I'm saddened that such a wonderful character has been allowed to be treated this way. I think Cussler may be spreading himself too thinly with these books and it is leading the writing to suffer. 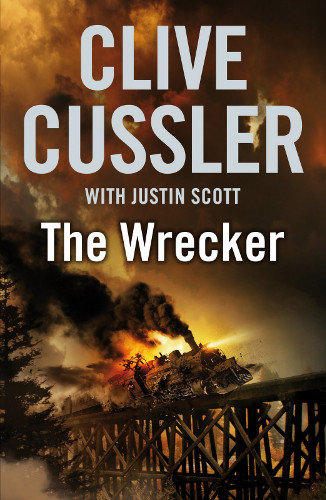 The Wrecker is the second Isaac Bell book from Cussler, this time with a co-writer, as is now usual. I had really enjoyed the first Ball book - The Chase - which was the first book Cussler had written alone for some time, but at the time I had understood it to be a one off, rather than the beginning of yet another series. This series however is not a spin off from the others, and is set almost a hundred years in the past, giving it a new and interesting angle.

This novel has a similar setting as the previous - Isaac Bell and the Van Dorn Detective Agency are hired to catch 'The Wrecker' - who is sabotaging the US's fledgeling rail network for unknown reasons. In keeping with the first book, that means there are a lot of trains featured (which makes an interesting change from boats).

The problem with this book is that it's too similar to its predecessor. Bell solves the crimes using the railway, the baddie is a master criminal by night and someone that no-one would suspect by day, and there is a lot of travelling on trains. It's full of history, a lot of which is probably true, but it's American history, and specifically railway history, which is not of any great interest to the average UK reader. I also have no knowledge of trains, and find it much harder to pick up anything about the trains in the novel than normally with modern day boats. What's a "Johnson Bar" for example?

My other main gripe with this book is that, for the reader, the mystery is finished halfway through - we find out really early who the Wrecker is, and then follow Bell who is somehow completely blind to it, despite all the evidence. I would have much preferred a story where we are kept guessing until the end too.

Is it a good read? Yes, I suppose so - it has a good range of characters and its historical setting is believable. I don't think it lives up to the prequel though, and definitely not to the good old days of Cussler's writing.