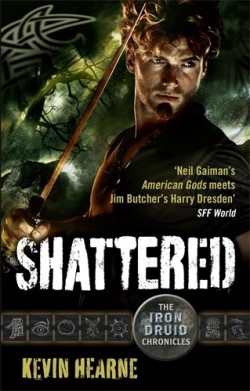 Book seven in the increasingly convoluted Iron Druid sees our cast expand again to three different characters we are aligned with - bizarrely two of them speak in one tense and the third another. This adds some more fun to the tale as we can follow a number of different plots simultaneously and makes it more entertaining.

The plot sees the characters split up on separate adventures, but nevertheless feels like it's treading water again - more about moving the pieces into position for a forthcoming finale rather than actually telling a self-contained story.

My interest fell mainly with the secondary characters, each of whom at least have an emotional arc and are exploring new things, but overall the plot didn't grip me and I found some passages particularly dense and hard to ingest.

I'm not out off enough to abandon the series, but I am kind of feeling glad it's almost over, as it already seems a bit dragged out. Perhaps once it's wrapped up I'll be better able to appreciate the individual parts. 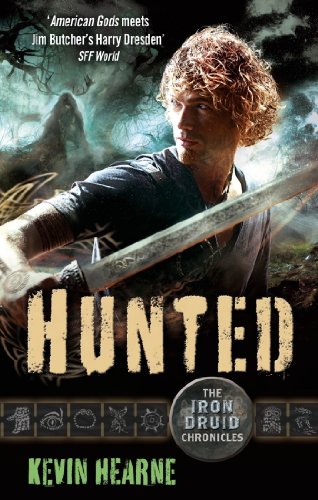 The sixth Iron Druid novel continues directly on from the fifth story, and so is kind of the second story of the second arc within the series. The characters are on the run from a group of vengeful gods, racing across Europe in an attempt to find somewhere safe to hide or mount a defence, and I just didn't really engage.

I don't know whether it's because the characters' motivations were established in a story I read three months ago, or whether I've just lost track since the continuity gap between books four and five, but I really struggled to feel interested in the plights of the characters and never felt that gripped feeling of being desperate to keep reading right until the train pulls into the station.

One thing I know failed to engage me was the rolling roster of secondary characters that drop in from a really wide variety of mythological pantheons. It's reached the point where they are so saturated that is can't keep track of who is who, which side they are on, what's motivating them, and why I should care.

So I'm afraid that this entry wasn't really my cup of tea. I don't think it'll stop me continuing with the series, but it's certainly not going to be something I hurry back to. 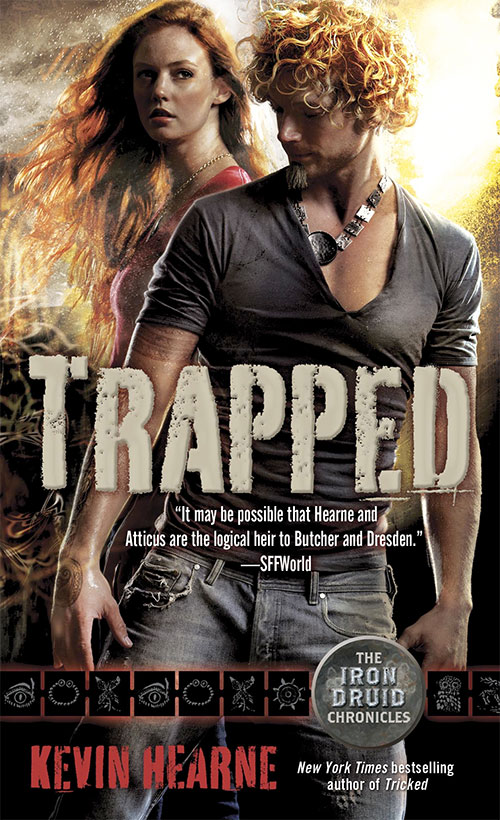 The fifth book in the Iron Druid Chronicles surprised me by being set twelve years after the previous book - a twist that I certainly wasn't expecting and one that left me trying to puzzle out when the stories were actually set, as I'd assumed the earlier stories were contemporary and struggle to believe that Hearne would want to be trying to predict the near future.

However despite the potentially futuristic setting nothing major appears to have changed in the world - at least in the limited time we spend in the company of mortals rather then the many domains of fantastical gods and mythical creatures. I was left a bit disappointed that the stories didn't continue in the same vein, but clearly the author wanted to shift some things up a notch.

There are a few references to an adventure which I have discovered, since finishing the book, was depicted in one of a number of interstitial short stories that I hadn't even realised existed. Again that threw me off slightly and made me wonder whether I'd been reading the series in the wrong order.

Anyway, back to this book specifically, which follows the characters as they are drawn back out of hiding and become involved in a complex set of rivalries which I'm not convinced I could have followed even if I'd been taking notes as I went along. Similarly I have no idea quite why one event led to another, and was slightly baffled by some of the action scenes which I think I was to tired to follow accurately enough to appreciate.

I enjoyed some of the other new detail though - some fascinating world building expansion explaining how Druidism works in this world, and some character development that I was sceptical off at first but later bought into, and of course the returning fantastic humour built around Oberon.

So overall a book I enjoyed despite feeling I didn't take it all in, and one that I'm certainly looking forward to following up with the rest of the series and the shorter adventures which ochre missed so far. 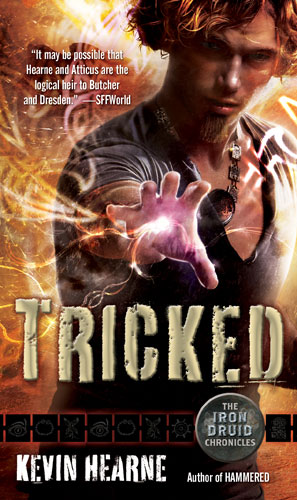 The fourth book in the Iron Druid Chronicles sees a slight change in the circumstances of the characters as they relocate, and follow up on some of the debts leftover from the previous books.

While the plot is a little thin and repetitive, the humour of the narrative remains fantastic and is the chief selling point for the series. The dialogue between Atticus and his dog, Oberon, is actually laugh-out-loud funny and kept me entertained throughout. It's a pleasure to read and must have been just as fun to write.

In some places, I struggled to remember events from previous books that were referenced - slightly oddly I felt they were explained where they weren't really relevant to the new plot, but left vague where they were. This left me in a scenario where I was irritated by a particular character without really understanding how they fitted in. On the other hand, I did like that it made reference back to earlier books, and their events continued to have repercussions for the characters, rather than everything starting again from a blank slate.

So mixed feelings overall - not convinced it's the best story in the series, though it remains funny, and I'm going to keep reading. 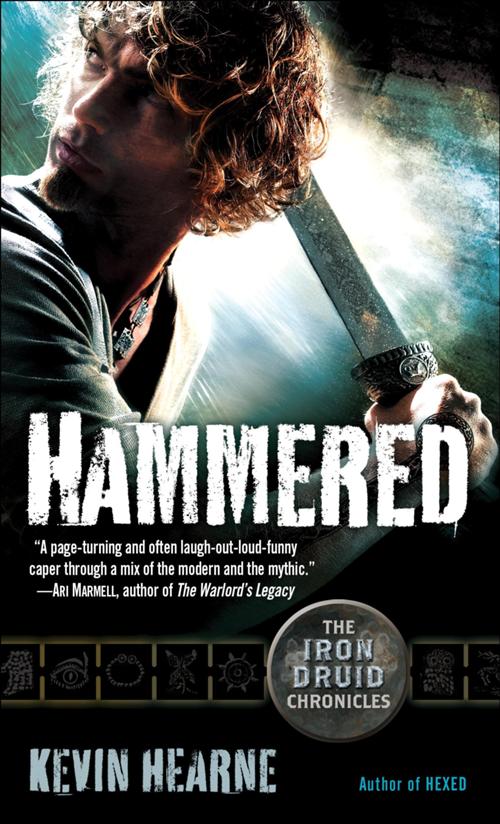 The third volume in the Iron Druid chronicles is a direct sequel to the second, and rounds off a number of story threads serving as an end to the opening trilogy. There are a lot of battle scenes which actually I find a bit of a turn off compared to the more talky bits, and the humour seemed to be taken a little too far in places.

The plot also felt a little more absurd than the earlier novels, despite being perfectly in keeping with the world and style established. It felt a bit 'epic' in scale and I think that detracted from the simplicity of the set up that had charmed me earlier.

There is a nice opportunity to get to know some of the characters a bit better, which I really enjoyed. As that part of the book began I was concerned that it might turn out to be filler just to space out the action, but actually it was very interesting and probably my favourite sequence from the book.

Overall, a nice action/fantasy/comedy romp that I enjoyed - but perhaps not quite as much as Hexed or Hounded. I'm still looking forward to finding out where Hearne takes the story in the next few books which are sitting waiting on my shelf. 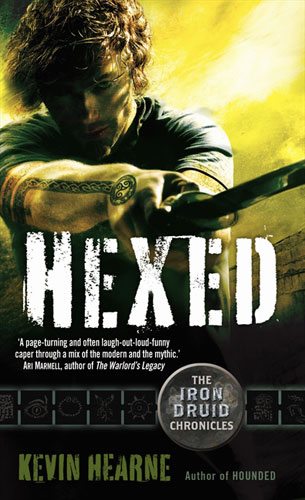 Book two of the Iron Druid Chronicles picks up pretty much right where the first book left off, following up on some of the hanging threads and rushing into new plots. A group of evil witches is coming to town, and they aren't the only threats that the last Druid will need to deal with.

I though that the first book in the series was fantastic, and so the second had a lot to live up to. Overall I don't think it quite makes it, feeling rushed and having too many elements to make a consistent narrative.

There were interesting developments and more was revealed about some of the characters, but it feels more of an action thriller with scene after scene of fight interspersed with witty banter. There's also something of a middle book feel, with the impression that it's working more to set things up for the third book than to have a single plot of its own. 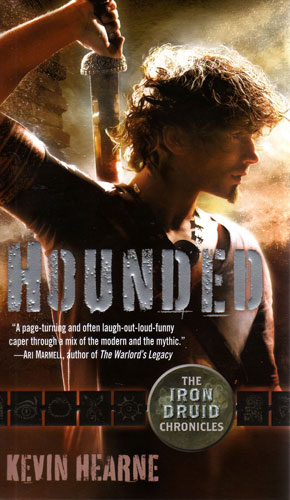 The first book in Kevin Hearne's Iron Druid Chronicles was recommended to me on the basis of similarities to Jim Butcher's Dresden Files novels which I've recently started reading. I would argue that it's not only similar but better.

The book introduces Atticus O'Sullivan, a druid living in the modern-day USA, where he's hiding from a God with a chip on its shoulder. A variety of fantasy tropes come into play in a surprisingly rich and well-constructed world. The plot flows neatly throughout and the action is kept to a strong pace with plenty of chapter-ending cliffhangers.

Hearne's first-person narrative really helps move the story along, and unlike the aforementioned Dresden Files books it doesn't feel awkward or jolt the reader from the narrative. The book is filled with humorous lines that somehow feel natural and unforced, and I found myself almost giggling out load on the train as I read.

Great plot, great characters, great world-building, and I've already bought the next book in the series. 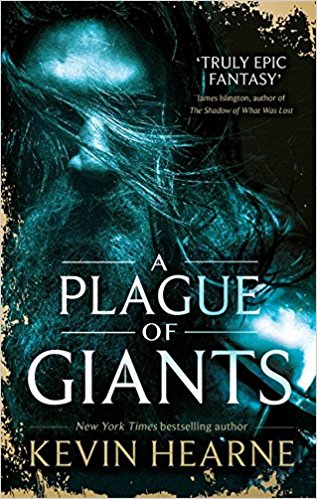 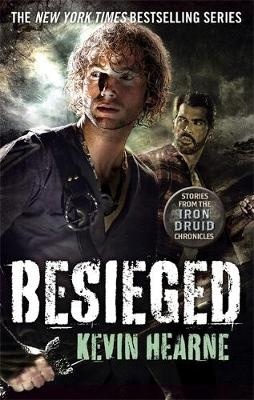 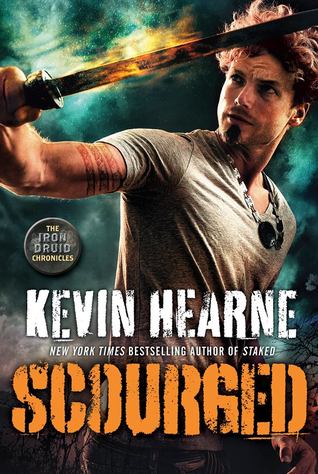 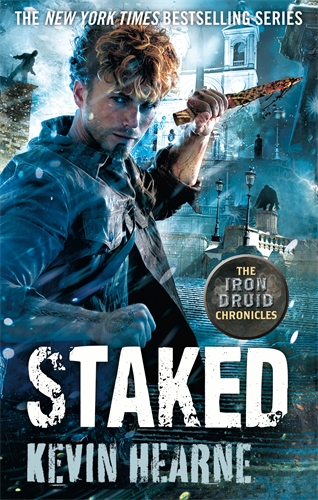