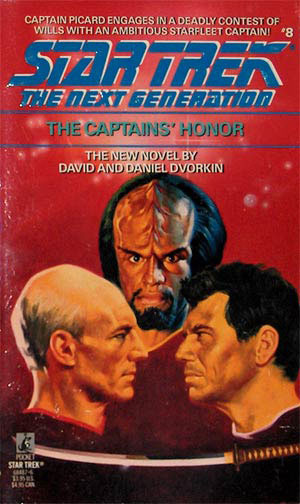 This Next Generation original tie-in novel is set toward the end of season one, and published in the late 1980s. It’s fairly typical of the sort of planet-of-the-week adventures common in novels of the time, but the content feels dated.

The Enterprise is called to help another Starfleet vessel which is defending a new member planet from invasion by an aggressive neighbour, but it soon becomes clear that their colleagues have some differences from Captain Picard and his crew.

There’s a lot of focus on a never-before-seen member of the Enterprise crew, and the text has the feeling of having been written (in the first half) as if this role was intended to be filled by Tasha Yar (who the TV series had already killed off) and then rewritten to work by substituting a random.

There’s also a lot that doesn’t gel with a later understanding of the Star Trek universe. The way that Federation membership works, the way that Starfleet crews work, and the backstory of Captain Picard all feel quite off - in some cases they are more Original Series-esque, which I suppose makes sense given the lack of TNG materiel the authors would have had to work with.