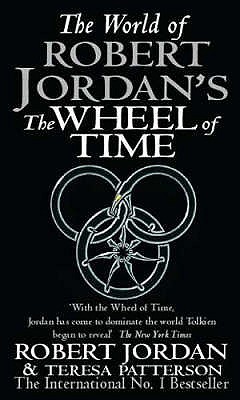 The World of Robert Jordan's Wheel of Time

I'm sorry, but I found this book rather a poor excuse for 'bonus materiel' for the Wheel of Time series. I'm enjoying the main series again - it's picked up a bit again in book seven, which is where I am - and as that's where the series was when this companion was published I decided to take a break from the narrative to see what it added.

The beginning of the book was interesting - it detailed the history of the world, explaining things which had only been hinted at in the novels and developing the backstory. It explains how the baddies came to be, and about previous battles with the 'Dark One'... interesting, I thought.

But then it gets to the present, and turns into a book of endless lists. A list of different types of animal found in Seanchan... a list of all the countries of the part of the world which for some reason doesn't have a name, and what types of clothes the people there wear. It just seemed to get bogged down in what ultimately read more like a guide to someone wanting to expand the universe (or make a film, for example) rather than adding value to the whole series for a reader.

So is it worth reading? I suppose so... if you are really into the series - at least for the history of the world part... I can't imagine getting anything from the second half unless I were some die-hard WoT fan... which I'm not... probably because I've only just arrived at the series as it is almost finished. Perhaps if I had read the first seven novels as they were published this would serve as an interesting reminder... but having read them all this year it's just repetitive.

The worst thing about this book however are the irritating little asides that refer to the main characters of the series, and explains a bit about them and what they are currently up to in the narrative. This is meant to be an in universe guide book of some kind... so how does it's author have access to these people, especially when they are portrayed as not wanting to talk about their circumstances to anyone (Perrin?). Grrrr. I really wish they had just kept it as a history and not mentioned the novels' characters at all.