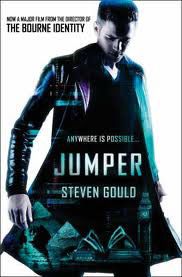 A literary adventure with one sci-fi element, Jumper surprised me in its depth and emotion, although in places seemed to lack direction. Davy Rice lives with his abusive father until one day he miraculously escapes by discovering a unique ability.

The strongest element of the story is the character of Davy - although forced to be strong he shows a lot of emotion throughout and it's clear that he, through the first person narrative, is putting a brave face on parts of his past while letting other moments show through in their raw nature.

The plot however is weaker and feels rather haphazard. A lot of the early plot is establishing things, and this part goes on possibly too long and involves several implausibilities. Time flows at a flexible rate and there are periods of time unaccounted for in order to line things up for the action, which arrives very late on in the story. Davy's emotional journey is certainly at the centre of things, but the events that tie into this seem off-balance.

It's certainly light on the sci-fi, and although I haven't seen the film, reading a synopsis confirms what I've been told: that it's a completely different story. Overall I found it an engaging read and one that I was surprised to find myself liking as much as I did. There is a sequel out there, and I'm planning to hunt it down.