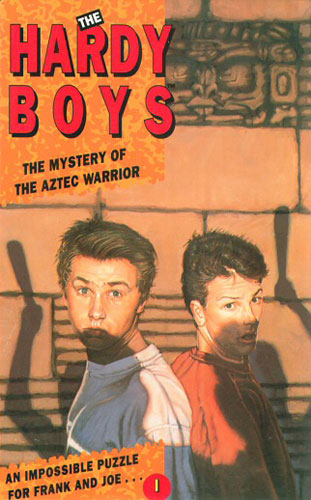 The Mystery of the Aztec Warrior

The forty-third novel in the original Hardy Boys series was marketed in the UK as book one - and so every time I’ve read this before (as a child without Wikipedia) I had assumed it to be the first book.

Reading it now, in the correct place in the publication order, it feels like it makes more sense here. The plot, taking the boys and Chet to Mexico (again) fit much more with a late series entry (indeed there’s been too much of them going on holiday throughout the middle of the series) than an introductory one.

It was interesting to note that this time the boys do have to comply with immigration rules, unlike two of their other recent international trips. However there remain dated narrative elements in the presentation of Mexican culture and people, and the way they place Americans on a pedestal, that feels like an unrealistic view of the world when the book was written as much as it would be today.

I remembered nothing of this book from my earlier readings, although there is one very minor fact that it gives which I realise I must have acquired from reading it years ago and internalised without source attribution. Overall probably one of the better adventures, though not at the top. 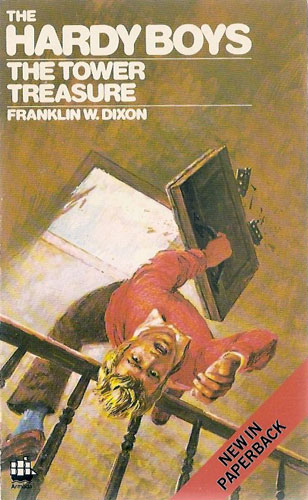 I recently discovered that the UK publisher's order numbering on the Hardy Boys novels that I read voraciously as a child was completely fictional compared to the order they were originally published in. The Tower Treasure had been labelled '31', but is in fact the first book in the series, and reading it again today (some twenty years later), it definitely comes across as being an introduction to the characters, their world, and indeed being their first adventure.

I'm still reading a UK paperback edition from the 1970s, and I'm aware this isn't the original text - most of the books being 'updated' in the 1950s, and this one being adapted for the British reader from the original US English. It's not just the spellings that seem to have been changed, but the language used too - I'm suspicious of 'Welsh Rarebit' for example (though haven't got a copy of the 'original' text to compare).

It introduces the characters with broad strokes - there's not a lot dropped in to differentiate Frank and Joe after the first chapter, where one is shown as being slightly more reserved than the other, but I was surprised by how many of the recurring characters make appearances in this first story.

The adventure itself is quite simplistic, and there are places where it felt that the author had tried to keep things a little too realistic, with the Hardy Boys themselves not being present for a big part of the action - they, and we the readers, only hear about it second-hand. It didn't quite go how I vaguely remembered, with there being at least one scene which looked like it was setting something up that later turned out just to be there to add a coincidence that helped the plot along.

Overall though I felt it still held up as an adventure story, perhaps nowadays for a younger audience than originally intended, and it was an interesting diversion to revisit the brothers for an hour or so.