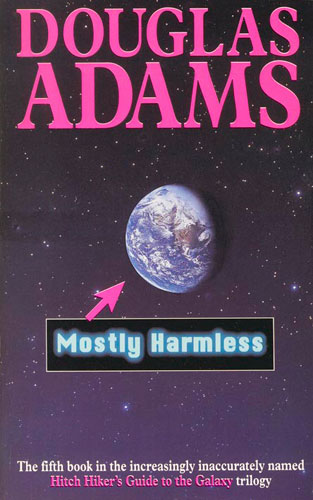 The final book of Douglas Adams' H2G2 series follows the random style of the fourth, with no particular overriding plot to tie together what's happening. It's execution however is much improved. While the book doesn't seem to have any particular story to tell, it hides the fact so well that unless you think about it too much, you wouldn't notice.

This is the longest book in the series (so far) and yet it's length seems perfect - neither too much nor too little happens to round off the series. Adams' writing style seems to have matured since the earlier books, and the characters seem more real, as do the bizarre situations that they find themselves in. There is a lot less use of random events to get the characters out of peril, which is something I have complained of previously, which helps the plot to flow better.

Personally I'm glad that Zaphod declines to make an appearance. The characters of Arthur, Ford and Trillian each get a nice chunky bit of action and their own plots up to a point, which is nice as up until now I've felt that there was far too much focus on Arthur.

Overall I think this may well be my favourite Hitchhiker book. It's the smoothest, most satisfying of the lot, and I'm only left looking forward to, although slightly dreading, what Eoin Colfer is going to do with the story next. 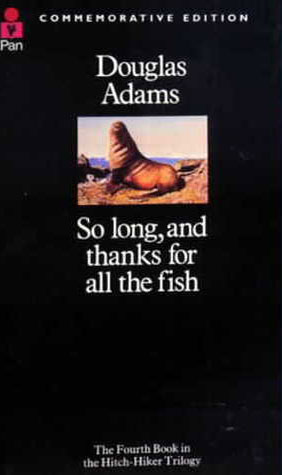 So Long and Thanks for All the Fish

I'm actually a bit at a loss as to what I think about this one... and indeed what it was meant to be about. The fourth entry in the series is like nothing that has gone before. The first two were the classic random style and the third pretty much a standard novel - this seem to have slipped sideways out of its genre and ended up as a sort of romantic farce.

Of the main characters, only two make a significant appearance, and one of those seemingly for no reason other than to enable a reasonless plot point to occur. Yes, this book does start with Arthur Dent in one place and end with him in a completely different one, but the journey seems to be without purpose and nothing seems to have been achieved.

It does pick up on a few of the asides from previous books, and still contains a few random asides of its own, but the scenes which make up the plot are only loosely connected and don't seem to add to anything.

This is certainly the lowest that the series has come so far, simply because the book is lacking in any sort of real plot. 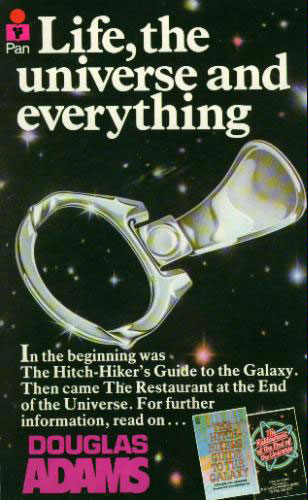 Life, The Universe and Everything

The third and (presumably) originally final book in the H2G2 trilogy has a shift in style from the previous two instalments. Whereas before the novels seemed to be a loosely connected sequence of scenes containing the same characters, this one has an overarching plot that runs through the entire novel.

This novel has a much more constructed feel to it, rather than the bodged together feel of its predecessors - probably because it was created as a novel rather than a radio series. This actually has lead to a much better novel as there's an interest in where it's going, rather than just being along for a rollercoaster ride. I really love that Adams has continued inserting random asides (although sadly not so many towards the end of the novel where things get more serious) and that some of them, while seemingly innocuous at the time, turn out to have major repercussions later on.

I don't think there's anything that I can really criticise in this book - Adams has certainly improved on his resolutions to perilous situations as none of them seem forced. In an improvement over many writers whose novels I've commented on here Adams manages to plant the seeds of his resolutions earlier in the novel without them sticking out like sore thumbs. Again though his characters are fairly flat and only Arthur seems to get a significant amount of time spent on him. Admittedly he is the main character but none of the others seem to be more than one personality trait. In some places I got the impression that Adams' entire inspiration for the novel had been from odd things that interested him, such as the theory of space-time based on Italian restaurants and some very odd plot points around Cricket - but this doesn't detract, instead adding to the wacky nature of the H2G2 universe.

Overall I actually think this is the best novel so far in the series, although the first is still the best book. 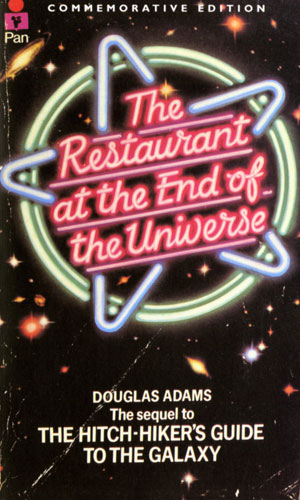 The Restaurant at the End of the Universe

The second book in the series continues in a similar vein to the first, although the flippant sense of surrealism seems more forced. The book is very much divided into a series of acts - possibly as a result of being based on the radio series which was presented as a set of discrete episodes. A lot of what happens in this book I remembered as being later in the series, which is quite exciting in a way as it means there's lots still to come that I've forgotten!

It's nice that some of the minor characters get bigger roles in this one - the plot moving away from a focus on Arthur and in fact on the most part it seems onto Zaphod and his investigations into who runs the universe. Trillian still gets a very poor showing however and the book probably suffers from a lack of female character action.

I find that Adams' writing seems to have slipped into a pattern of peril, escape, peril, escape etc. and the presence of the Infinite Improbability Drive acts a bit of a deus ex machina providing escape from peril that can be anti-climatic and has a lazy feel to it.

This book has not only some very funny ideas, but ideas which when thought about pose some very interesting questions that still have relevance on this planet... for example food which wants to be eaten, and shipping off a useless third of the population.

Overall, another good quick read that deserves going over several times to catch everything missed at first - but not quite as fantastic as the original. 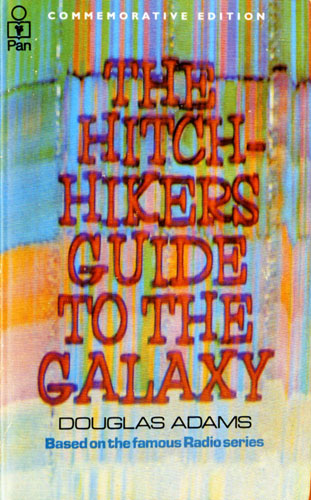 The Hitchhiker's Guide to the Galaxy

This is probably only the third time I have read this modern classic, but somehow I still know the plot of the first book by heart. There are all the usual things to say of Adams' work. It's insightful, thought provoking, worryingly realistic and amazingly witty.

The characters are very simple, and yet in H2G2 this seems incredibly natural, where in any other book it would probably be boring and childlike. Some places don't rub well, Zaphod and Ford are possibly a little too similar, and Trillian is distressingly under-used as the only female character.

Adams' style doesn't tend to include a great deal of description of locations, which is almost a relief after all the Wheel of Time epics I've been reading recently, and I like to think this is a side-effect of the story's origins in radio. The radio experience has also rubbed off really well on the dialogue, which I can hear the characters speaking in my head. This lends a great deal to the comedy, especially the interplay between Eddie the computer, the talking doors, and of course Marvin.

My two criticisms are related. Firstly that there seems to be something missing from the plot - thinking back over the plot I keep feeling there's something I must have missed to pad out the middle. The second is that the ending is incredibly abrupt and resolves absolutely nothing - although I suppose that could be part of the beauty.

Overall I've enjoyed reading it again and am looking forward to going back over the whole series in preparation for the release of book 6 next month. 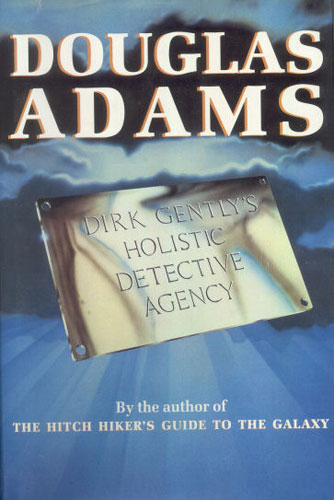 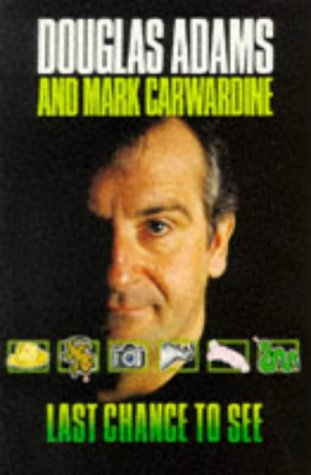 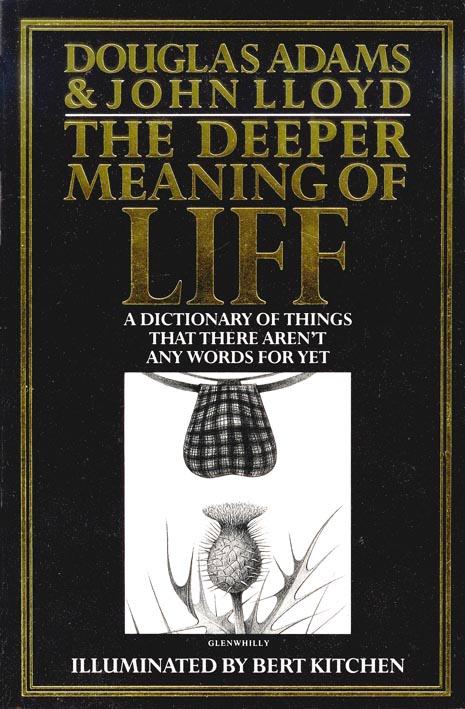 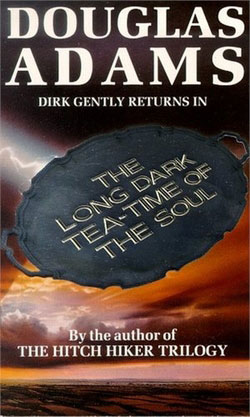 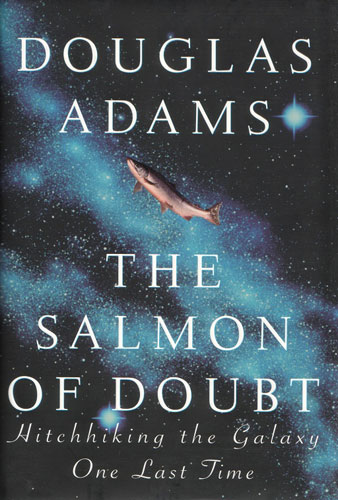