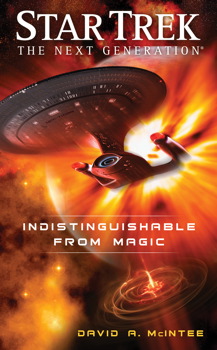 McIntee's book feels a little out-of-place in the next generation continuation, making very little reference to the ongoing storyline from the recent Typhon Pact mini-series. It focusses on Geordi La Forge, possibly the most under-used TNG character, as he joins a host of other familiar characters to investigate when a missing 200-year-old starship is discovered.

While the plot is action-packed, it almost seems like there is too much going on - it's not that it's difficult to follow, but the feeling I got from reading the novel is that it is more a series of very closely related episodes rather than what I'd describe as a single story.

It's good to have a Geordi story, and to see characters such as Scotty, Nog, Reg Barclay and Guinan thrown together, however in places that makes it seem almost fan-fic-ish in its casting - it seems implausible that these characters would be allowed to serve together. One of the themes explored in the novel is romance, however it feels very awkward and on the most part it seems to be skirted around rather than being addressed properly, something which disappointed me.

There are quite a few niggles in the book that irked me, including continuity errors, and around the three quarters mark some copy-editing problems (half of some sentences were missing), but overall I found it an enjoyable read. Probably not a favourite but a happy diversion from the more serious novels that have been out recently.