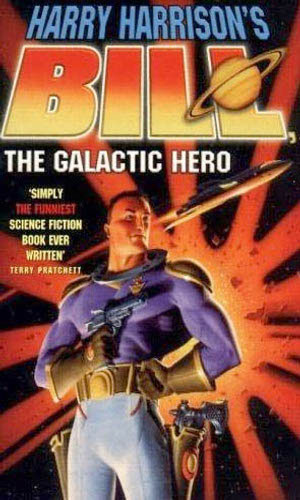 Bill was a peaceful farm boy until he was lured by the martial music of a passing recruitment sergeant, drugged, and made to enlist in the Empire Space Corps. His basic training is sheer hell, but somehow he manages to stay alive and achieve the rank of Fusetender 6th Class in the process.

According to the front cover of my copy of 'Bill the Galactic Hero', it is the greatest comedy sci-fi of all time. Personally I disagree (I recall Red Dwarf being funnier). It is the story of Bill, a casual farm labourer who is coerced into signing up to the military in a slightly surreal authoritarian future.

The book contains three distinct adventures of Bill's which follow on from one another. It's quick to read but also easy to get lost, and on a number of occasions I found myself having to turn back a page to work out what was happening. In places time passes very quickly, and the changes in Bill's circumstances come often.

The comedy is dark and mostly at the expense of the authoritarian galaxy. It feels old and tired - probably because this is a book written in the 60s - and to a modern reader comes across as overly pessimistic. The writing style, and indeed the printing style, also seemed antiquated, and I was not gripped. It's petty, I know, but the placement of the page numbers in my copy was awkwardly close to the prose that made me keep reading them at the end of each left-hand page.

Overall, it's not a book I can recommend. I was bored by the end, and won't be looking up any of the sequels.