The Affair of the Thirty-Nine Cufflinks 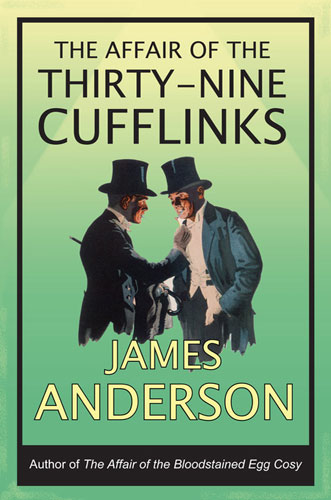 Understandably, Lord Burford had some misgivings about hosting another house party at Alderley, his beautiful country mansion. After all, the previous two could at best be described as disastrous. But with family members travelling down for a relative's funeral, the Earl really had no choice but to offer them accommodation. It didn't take long for things to start going wrong. One of the guests claimed she had knowledge that would ruin the others' reputations, but luckily nobody took her seriously enough to take offence. At least, that's what they thought up until her body was found.

The third and final mystery at Alderley concerns the death of Lord Burford's great-aunt, and the turmoil and murder brought about by it.

It's just as good, if not better than, the two previous novels - very much in the Christesque tradition of country house and assembly of distant family members. The complex interaction of characters with history makes it stand out from the earlier episodes with random house guests and the recurring characters seem settled in their personalities. The chief inspector and the butler are particularly pleasing to read.

The mystery is similar is execution to the earlier stories, but this is all part of the charm. The investigation just as confusing, and the resolution just as satisfying. I easily managed to spot one of the smaller mysteries (though purely by chance rather than using the somewhat obscure clues), but the main solution escaped me all the way to the big reveal.

I've really enjoyed reading this trilogy and am disappointed that Anderson didn't have the opportunity to continue the series. I'm going to have to hunt out some of his other, seemingly out-of-print, works.