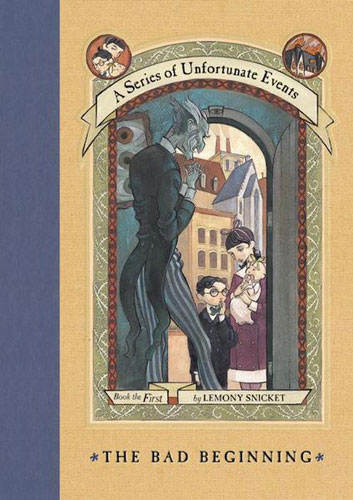 The three Baudelaire children encounter a greedy and repulsive villain, itchy clothing, a disastrous fire, a plot to steal their fortune and cold porridge for breakfast. Then again, why trouble yourself with the unfortunate resolutions?

The title actually does say it all. When three siblings are orphaned, they are sent to live with an evil distant relative who wants nothing more than to steal their inheritance.

As an adult, this is a very quick read, but for children I can see each chapter being a perfect length for a bedtime story - but only if they are mature enough to cope with the disaster that befalls the characters at every turn.

Snickett has a captivating writing style - informal and entertaining despite the unfortunate nature of the subject matter. He doesn't shy away from introducing new vocabulary and makes learning new words into part of the joke. In a couple of places he breaks the fourth wall, which felt a bit odd to me as it didn't happen early on and broke the flow a little, but otherwise I felt the narrative was very good.

I'm not sure whether I will be bothering to pick up books two to thirteen though. I think it's very much a book for children to enjoy and even as a younger adult it all seemed a little depressing and, dare I say it, silly.