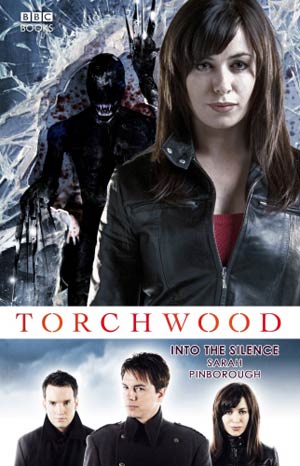 The body in the church hall is very definitely dead. It has been sliced open with surgical precision, its organs exposed, and its vocal cords are gone. It is as if they were never there or they've been dissolved! With the Welsh amateur Operatic Contest getting under way, music is filling the churches and concert halls of Cardiff. The competition has attracted the finest Welsh talent to the city, but it has also drawn something else - there are stories of a metallic creature hiding in the shadows.

Into the Silence is the first book in the latest trio accompanying the BBC TV series, and is set between series two and three. The three remaining main characters are joined by a disgraced police office with previous Torchwood experience to investigate a number of brutal murders of singers across Cardiff.

While the idea is sound and the plot moves along at an interesting pace, not a lot is learnt about the main characters, with most of the characterization focussing on guests - presumably so as not to tread on the toes of the TV writers. The alien itself is satisfyingly creepy, but it's physical description makes it a tad too similar to every other torchwood bad guy.

While the plot does flow fairly well, there's a lot of backstory peppered throughout the novel that exists purely to set up the ending and which never interacts with the main plot on the way. As much as I often complains about confidences drawing people together in novels, this set up meant the ending was fairly predictable from quite early on.

Overall I found this to be a satisfying quick read, and I definitely think that the Torchwood novels are improving as the series progresses.