The Mystery of the Moaning Cave 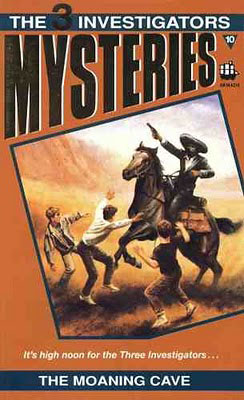 Jupe, Pete and Bob, the Three Investigators, stand transfixed as a great black horse gallops towards them, its rider hidden by a black scarf and sombrero. Suddenly there's a glint of metal, and the boys see that the cowboy's gun is aimed straight at them.

The Mystery of the Moaning Cave sees the Three Investigators travel out to the desert to stay with a friend of one of their fathers. They encounter an unusual cave which makes strange noises in a way that doesn't appear random, and set out to investigate.

The story follows the typically slightly creepy bent of the series, going places that in some cases I recall being creeped out by when I originally read them as a child. There's a lot that goes on which would be slightly uncomfortable from a modern health and safety viewpoint, but the book does well to represent the real peril that the hats era often find themselves in.

This is actually one of the more plausible plots for the series and this really helps to engross the reader and suck them into the plot. There are a few twists that don't seem to fit properly, some convenient coincidences and the oft played but scarcely plausible call to the local police chief.

Overall a good entry in the series and one that encourages me to continue re-reading the series.