A Time to Hate 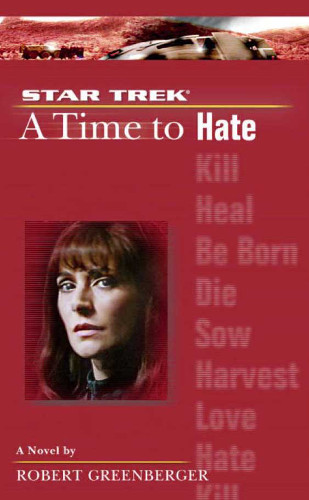 Captain Jean-Luc Picard and his crew become caught in the middle of a violent outbreak of destruction between the Bader and Dorset races that have colonized the planet Delta Sigma IV as they race against time to stop the carnage and save their own lives.

This is the lowest in Star Trek noveldom I've visited in a long time. Very little happens until the final few chapters, and even then it's nothing that could not have been guessed from the previous novel. In fact, several of the major plot points have so blatantly been coming that it's a surprise there wasn't some sort of twist at the end. Admittedly it is lining up characters for their places in Nemesis but it's getting a bit silly when the entire plot seems to be just for the sake of one tiny set up.

For this is the book in which Riker and Troi finally decide to get engaged... and the author's attempts to explore this relationship by separating the two characters are sadly quite dire. Star Trek just cannot do romance. It's a well established fact, and this book proves it with both Riker and Troi and the going nowhere feelings between Picard and Crusher. It's just tiresome because the reader already knows where it is going.

The plot itself is next to non-existent. We follow characters who do next to nothing, and even the interesting interplay from the first half between Riker and Seer is missed out of this - Riker is paired with his sulky father, leading to little by way of conversation or interesting exploration of the alien races (one of which hilariously comes from Dorset!). There are holes in the plot (no combadge should mean no universal translator) and continuity problems (someone leaves but then is still there) which just make the novels seem badly written and edited. I'm not surprised that this pair are the only two of the nine out of print - they just aren't up to scratch.

In fact, the end is where it gets interesting - we finally get the proposal, Crusher comes out of her stupor and makes a decision and some interesting hints are let lose about what is to come in the next few novels. At least it's David Mack next - that should make for a more entertaining read.