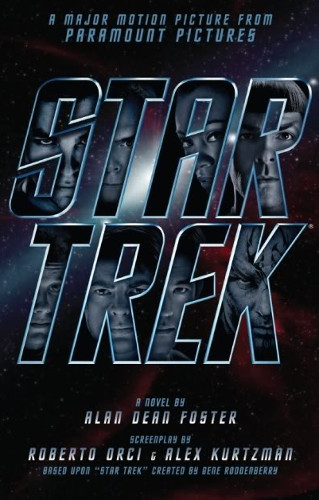 Going back to the very beginnings of the classic Star Trek, the film tells how James T. Kirk, the half-Vulcan Spock, Dr McCoy, engineer Montgomery Scott and crew members Chekov, Sulu and Uhura first came together as rookie Starfleet recruits, and how they embraced the destiny that would later send them out across the galaxy accompanied by the immortal words: 'These are the voyages of the Starship Enterprise...'

What a disappointing book to read, especially after the brilliance that is the film upon which it is based. Sadly Foster's novelization isn't up to the task, and presents us with little more than a prose version of the script.

I would have prefered to visit more of the characters' heads and seen their thought patterns, but instead, like the film, we stick with Kirk, seeing things from his narrow perspective and getting very little extra information about what's going on inside.

The only redeeming feature to this were the scenes that were deleted from the film... an excellent scene where Kirk as a child is cleaning his step-father's car, and a useful one where Spock is born, which would have been an excellent place to introduce the traditional Vulcan finger rubbing, which could then replace the most out of place scene later on.

Foster completely ruins all the jokes. It's almost as if he's gone through, found them all, and altered them just a tiny bit so they don't work. The most obvious example is when Kirk and McCoy first meet, and McCoy states that all that he has is his skeleton... instead of the correct 'bones'.

Overall, not good, but hopefully everyone who reads it will have already seen the film, which is fantastic, and not be put off by this poor showing.