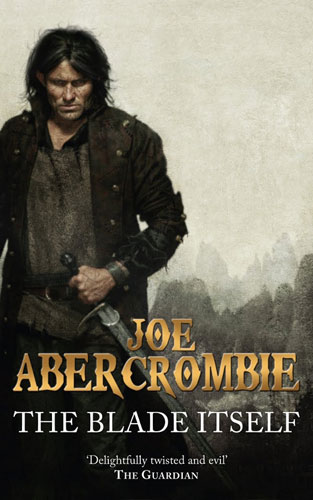 Inquisitor Glokta, a bitter relic of the last war, fencing champion turned torturer, is trapped in a twisted and broken body. Nobleman, officer and would-be fencing champion Jezal dan Luthar is living a life of ease by cheating his friends at cards. And Logen Ninefingers, an infamous warrior with a bloody past, is about to wake up in a hole in the snow with plans to settle a blood feud with Bethod, the new King of the Northmen - ideally by running away from it. But as he's discovering, old habits die hard... especially when Bayaz gets involved. A bald old man with a terrible temper and a pathetic assistant, he could be the First of the Magi, he could be a spectacular fraud, but whatever he is, he's about to make their a whole lot more difficult.

While this book certainly is not bad, I didn't find it to be anything special and it's not imparted any urge in me to go out and read the rest of the trilogy. The story follows three main characters, Jezal, a self-obsessed soldier training for a fencing contest, Glokta, a torturer working for the government, and Logen, a warrior on the run.

I found the opening of the novel hard going, and throughout the entire first half often considered giving up. Partly this was through the way the text is presented - in certain sections the narration is in language that attempts to emulate the speech form of the characters, which could be a really nice stylistic technique, but for me falls flat on its face. The particular problem is where adverbs and adjectives are confused, which would work fine in speech but in narration was really jarring and breaks the flow of the text.

The characters were also rather uninspiring. Of the three I mention above, I only felt any sympathy for one and found the other two slightly repulsive. The characterizations of Jezal and Glokta are very good, although they can be a little repetitive, but Logen seems to be painted initially as one thing but then is suddenly very different later on.

Plotwise, this book seems to exist only as a start to something longer - there is no self-contained story to this episode, which is another of the problems I have with it. The only character with a real arc is Jezel, and even that seems just a means to an end. The climax of the book has an artificial tension to it that feels out of place and has no motivation to it other than to give an exciting end to a book that lacks adventure.

Overall I found this book somewhat uninspiring, and I'm not encouraged to go out and get the second book in the series. I might still read it, but I didn't like the characters enough to worry about what might happen to them next.